EU says tax blacklisting should be no surprise

FIJI, the Marshall Islands and Vanuatu have been added to a European Union blacklist of tax havens. And despite concerns about process raised by all three countries, the EU has told Islands Business that these jurisdictions should not be surprised to find themselves on the list, “as they were given every chance to engage and address EU concerns.”

The countries were added to the blacklist in March, joining Samoa, American Samoa and Guam who were already on the list, but had been given a year to change their tax rules.

Calling the list a “last resort”, the EU states: “Over the course of 2018, countries were assessed on the basis of three criteria – tax transparency, good governance and real economic activity – as well as one indicator, the existence of a zero rate of corporate tax. This methodology is clear, transparent to all jurisdictions concerned and supported by all Member States. Our method is fair: progress made should be acknowledged and visible in the list.”

The blacklist, which was first established in 2017, subjects identified countries to stricter controls on transactions with the EU and reputational damage. It includes tax jurisdictions which are alleged not to comply with EU regulations. In effect, it means European banks must carry out extra checks and due-diligence on any transactions involving customers or other financial institutions in the listed countries and territories.

However Fiji’s Revenue & Customs Service has dismissed the listing as “largely symbolic” and says it will have virtually no impact on the minimal EU trade and investment in the country.

FRCS Chief Executive Visvanath Das claims the EU’s decision was based on the incentive package that Fiji uses to attract and cultivate new business, such as moving headquarters to Fiji. He says Fiji stands by this package, and that the EU did not take this into consideration during consultation on the issue.

In response the EU says while jurisdictions can design their tax systems as they wish, “not being in line with the good governance standards the EU is promoting, implies being included in the list of non-cooperative tax jurisdictions.”

“Furthermore, Fiji’s commitment to comply with two articles under Tax Transparency and the implementation of the anti- Base Erosion and Profit Shifting (BEPS) measures by the end of 2019 will continue to be monitored. BEPS refers to tax avoidance strategies that exploit gaps and mismatches in tax rules to artificially shift profits to low or no-tax locations,” it says. 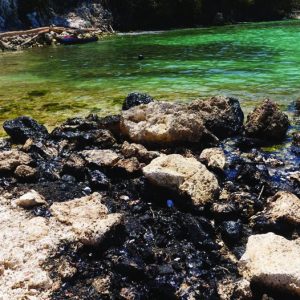 A murky mix of vested interests

AN oil spill in Rennell, Solomon Islands is turning into a disaster of catastrophic proportions, threatening