Step Up War Against Drugs

Parcels of hard drugs washing up on the shores of some remote and isolated islands in Fiji, the numerous arrests of drug dealers in Tonga and now the detention of what’s believed to be an armoured boat in the waters of Papua New Guinea have all the tell-tale signs that drug cartels in the Asian and American continents have taken their game up to a whole new level.

It must be fair to say that they have declared an all-out war on all that dare stand in their paths, whatever or whoever that may be. As shown in the recent incident on remote Bidibidi Island off the eastern coast of mainland Papua New Guinea (see page 11), these gangsters and the cargo they transport will spare nothing and will go to any length in order for their fiendish objective to be achieved.

It goes without saying that given the vastness of the Pacific Ocean and how spread apart some of our islands are, our borders are porous and the proper policing of our waters a near impossibility.

Take the small island republic of Kiribati for instance. For an island nation that lay claims to a maritime boundary that is as big as the size of continental United States, it only has one single patrol boat to police all of its waters. One small diesel powered boat. Bigger countries like Fiji fare no better, as aging boats over the years had reduced its fleet to one.

Certainly it is an unacceptable state of affairs and surely something that is not lost on the drug cartels of Asia and the Americas.

The closest leaders of the Pacific came to addressing the scourge of hard drugs and the use of the Pacific as a drugs transhipment point in their Boe Declaration on Regional Security in Nauru early this month is their affirmation for an expanded concept of security which addresses among other things transnational crime.

Sad to say the region will have to do more, way much more if they are to curb this menace. If the cartels have raised the bar, then the region needs to raise their’s way further and farther. It calls for an all hands on deck approach, and there is no time to lose.

While securing a lot of patrol boats would help, there are other solutions that are not as expensive but very practical still. Collaboration and coordination is crucial. The Forum Fisheries Agency currently runs a very successful ocean surveillance centre which relies on a very comprehensive network of satellite and aircraft imagery. Of course their core role is to stop illegal fishing in our ocean, but surely it should not be difficult to extend that already working system into the war against drugs.

Inter-island ships and aircraft, especially those aircraft that fly domestically (since they tend to fly in lower altitudes than international bound planes) can be roped in as well in the fight against this seige.

National and international drug and security agencies need to be talking and working together more often both at policy and operational levels. Opening up your sea borders to pleasure boats for example may bring in that much desired foreign exchange, but one has to be ever alert about the undesirable cargo or hangers on that tend to follow in their wake. 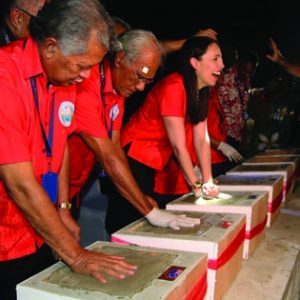 Keep the China/Taiwan spat in check