WE wish the Director-General of the Forum Fisheries Agency, Dr Manu Tupou-Roosen, every success in the challenging task ahead.

With years of experience in the agency and the intense talks around fisheries each year, she is well placed to take over from the outgoing James Movick.

Much like her predecessor, Tupou-Roosen is a smiling, polite Pacific Islander – well-spoken, confident, friendly and unassuming.

But beneath that tropical exterior is a steely resolve to get the work done and an attitude that no challenge is unsurmountable.

In negotiations with Distant Water Fishing Nations like the United States, Japan, China and Taiwan, Tupou-Roosen has not been intimidated by posturing and threats.

The most recent talks on tuna at the Western and Central Pacific Fisheries Commission in Passay City, the Philippines, dragged into the early hours of the morning – forced to a large extent by the refusal of larger nations to make concessions for the owners of the resources.

The success of the negotiations for the Pacific was due largely to the work of the FFA team of which Tupou-Roosen was an integral part, preparing to step into the new role.

Regional Fisheries Minister have expressed their wholehearted support for the new appointee, confident that she has been prepared sufficiently through years of on the job training.

Fisheries has been recognised as a multi-dimensional and multi-sectoral issue with huge potential to provide economic opportunities at national and regional level.

An area which will demand Tupou-Roosen’s immediate attention will be Marine Domain Awareness and the securing of maritime boundaries.

Twenty per cent of the world’s ocean falls in the Exclusive Economic Zones of Pacific Island Countries and Territories.

That portion of the ocean is under increasing threat as demand for tuna grows in the developed world whose own fish stocks have been severely depleted.

While the Pacific has generally spoken with a single voice on fisheries management, the pressure from outside the region – mainly China with its quest for resources – has started to affect solidarity.

Tupou-Roosen will need to negotiate and maneuver between nations if the Pacific is to remain united and demand recognition for its tuna stocks as well as securing the best possible price.

She will also need to take up the request by Forum Fisheries Ministers to address continued human rights abuses on fishing vessels operating in the Pacific region.

This will include the improved labour standards for all crew. Looking towards the WCPFC meeting the issues Tupou-Roosen will take up on behalf of the region include:

• Maintaining the strength of the tropical tuna measure and progressing the high seas limits and allocation process;

It is not an easy task, but we are confident that Tupou-Roosen is more than suited to the challenge and will acquit herself well. 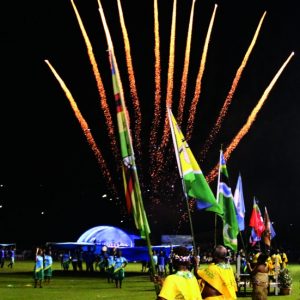 Today, Solomon Islands stands on the cusp of a bright future supported by a growing private sector

THE Solomon Islands celebrated 40 years of independence this month. Despite four decades of tumultuous