Luve ni yali, a newborn, was issued a fresh certificate of identity by a Pacific diplomatic mission in Canberra so that he could be repatriated home with his mother, a temporary migrant worker who fell pregnant while in Australia.  Mary, the mother, is now a battered divorcee.  The biological father is not even aware of the repatriation, and in any case does not care as ‘Luve-ni-yali’ is now ‘out of his sight and therefore out of his mind’.  Mary has two other children from her only husband, and they are both living at home.  Mary is dark but ‘Luve ni yali’ has blond hair and light skin.

Mary was recruited as a seasonal worker and issued a six month-visa to work on an apple orchard in Tasmania.  This ‘International Relations’ visa (Subclass 403) is issued by the Australian government to strengthen people-to-people links with Pacific islanders.  The COVID-19 outbreak with lockdowns on international travel extended Mary’s stay to three years.  Excellent news for Mary as she would now be able to earn more, and good for her employer given the surety of an employee during the pandemic.  For Mary, the seasonal work visa was an opportunity of a lifetime to travel abroad, earn income, and learn new skills.

Mary was accommodated in a group house on the farm, given multiple shifts – including overtime work – and paid on time.  No one knows if she was raped, coerced, or induced – but the outcome is clearly consequential.  Mary could not continue working following the birth of the child.  The visa does not allow workers to bring in family, and women go through medical examination prior to departure to ensure that they are not already pregnant.  Pita, her husband, knew of these conditions.  Luve ni yali, which translates from Indigenous Fijian to ‘child of the missing’ dad, will remain unhinged from his home.

The COVID-19 pandemic has reduced flights to the Pacific islands.  All arrivals are quarantined away from family for 14 days.  Mary was helped by her diplomatic mission in Canberra to return home, and by her government complete quarantine.  But Pita was furious on being informed of Mary’s early arrival.  He threw her out of their house and family.  Destitution beckoned but for the Women’s Crisis Centre.

Luve ni yali will grow up a lost child in his new home. He will face ridicule, given the pejorative connotations of him being without a dad.

He will not have access to land held under customary title.  While the mother of every child is easily identified, a child’s father provides the cultural connectivity within patrilineal societies.  Luve ni yali is an innocent victim of a temporary migrant labour scheme that has failed him.

The Seasonal Worker Program (SWP) was launched in July 2012 with noble intentions.  It was to meet the demand for low and semi-skilled workers in rural and regional Australia while providing employment and income to many within the neighbouring islands.  The visa is for a maximum of nine months to allow workers to circulate through Australia, returning to their families with savings to invest in homes, healthcare, and education of their kin.  Prospective employers are required to demonstrate the need for overseas workers and the capacity to host them.  Participants in the SWP must pass health and character checks and pay for travel to, and health insurance while in, Australia.

The concept of a seasonal worker program to allow Pacific islanders to work in Australia and New Zealand was first mooted in 2005 at the Pacific Islands Forum. New Zealand took lead by launching the Recognised Seasonal Employer scheme in April 2007 with Australia following soon after.  Both schemes have ameliorated some of the shortfall of workers in select sectors during peak demand while providing jobs and income to the recruits from the islands.

The void in local labour markets is the result of locals shunning the difficult, dirty, and sometimes dangerous nature of agricultural work.  Further, the seasonal nature of the work in rural and remote regions are not rewarding enough given the prevailing rates of remuneration.  But Australia, as a major producer of food, needs workers that to date have been imported in the form of backpackers, students, and citizens from New Zealand and the Pacific islands plus Timor Leste.

The SWP was designed with good intentions, but it desperately needs improved implementation.  For a start, couples must be encouraged to come for work under SWP to reduce the risks of having more ‘luve ni yalis’.  The restrictions on work solely for their sponsor must be lifted if the workers are to maximise their income.  Most importantly, close oversight of the SWP by the responsible governments is required if exploitation is to be avoided.  A comprehensive review of SWP is both urgent and overdue.

SWP has noble intentions, but Luve ni yali is not one of them.  This is not an isolated incident either.  ‘Luve ni yalis’ may be able to claim their rights.  Fathers can now be traced through their genes, so the missing dad will be discovered.  What obligations does the biological father have towards his child (i.e. luvena) – even if they reside apart/abroad?  Can a ‘Luve ni yali’ claim Australian citizenship?  Does his mother qualify for maintenance while raising the child abroad? 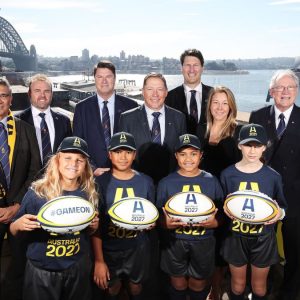 Australia is attempting to become the sole host of the 2027 Rugby World Cup.