Vanua Levu farmer, Isikeli is one of the many Fijians who saw his property destroyed during Tropical Cyclone Yasa in late 2020. The roof of his home came off in the strong winds. But the first thing he is doing to recover from the cyclone is to work on his crops, and he is relying on a liquid soil conditioner and soil microbial stimulant, Karyon, to help him do just that.

Karyon Organic is made from plant by-products and is fully organic. It is not a fertiliser and is meant to be used in combination with fertiliser, whether organic or chemical. This is because Karyon does a job that fertilisers do not do. While fertilisers add nutrients into the soil, Karyon looks after the soil ecology and micro-organism population.

“We started using Karyon early this year, before COVID,” Isikeli says. “I was given instructions on how to use it on my dalo, kumala. I saw how different it was, how it worked.

“I used it on kumala plants that didn’t bear kumala before. [Now] when you dig them, the kumala is really good,” says Isikeli, who also grows watermelon and cucumber, and plans to plant ginger and capsicum.

The improved crop yields Isikeli has experienced mean he has been able to reinvest in the farm. Isikeli and his wife Bale used to hire tractors but now they can afford to buy their own.

Karyon is produced in Pune, India, and Samisoni Enterprises is the regional distributor of Karyon Organic in the South Pacific, including Australia and New Zealand. Karyon Organic Fiji Field Manager Jope Koroisavou says while they don’t know exactly how many Fijian farmers are already using the soil conditioner, they think it is more than 3000, ranging from backyard planters to fully commercial farmers.

Balmindar has been using Karyon for the past five months, after being introduced to it by word of mouth.

“I have seen the size of my produce grow bigger in size and the soil has been enriched for other products. If I plant some other crops, I don’t need to apply Karyon again. The soil has been enriched through the application that has been used for the prior product. Before, I was using conventional fertilisers, I’ve reduced the amount used. I’m fully dependent on Karyon because the output is very great. The yields are better, the yields are healthier and bigger in size.”

“One of the advantages of Karyon is shelf life,” says Koroisavou. “We have observed long shelf lives of our vegetables, and this is particularly good for Vanua Levu farmers, [and] for maritime farmers because one of their challenges is how they get fresh produce into the market. Most of the time, because of the freight and long shipping hours, by the time it reaches Suva, the crop loses its quality and its appearance.

“We’re hoping that by getting Karyon to the maritime islands, they are able to compete with local, rural, open farmers into the same market. So, it’s not only fresh looking, but also sweeter than the normal conventional crops that are harvested in Suva.”

“One of the missions of the Karyon company based in India is to help end hidden hunger,” says Hanisi Hodge, Marketing Officer for Karyon Organic Fiji. Hidden hunger is the lack of vitamins and minerals that we face when the quality of food we eat does not meet our nutrient requirements. This happens when food is deficient of micronutrients, trace elements, vitamins and minerals—all of which are essential for healthy human growth and development.

“Geologist David Thomas who did his research and published his findings have found that a plate of broccoli today has like a quarter of the nutritional value that a plate of broccoli would have had in the 1980s. In terms of trace elements, vitamins and nutrients, we’ve seen a global decrease in the nutritional value of like fruits and vegetables, so you have to actually eat more in order to get the same vitamins and minerals that you would have gotten 20 years ago,” Hodge says. “Part of the reason they invented the product is because they realised that the chemical fertilisers that we’re using are actually killing the micro-organisms in the soil. When you continually use chemical fertilisers those microbes die, but the Karyon product brings them back, and one of the benefits of bringing them back is that the nutritional value of plants improves.”

Samisoni Enterprises hopes to work with locally based scientists to test the nutritional value of vegetables grown in Karyon-enriched soil.

The company is also planning to release a TC Yasa package for farmers affected by the recent cyclone to help them re-establish their farms says Koroisavou. They also hope to expand into the wider Pacific market. “We’ve sent samples over to New Zealand, Australia, a couple of islands and our first purchase this month went to Tonga,” Koroisavou says. 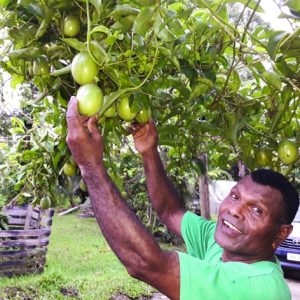 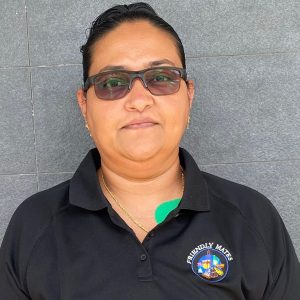 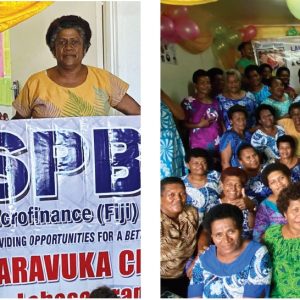 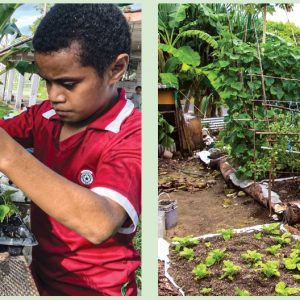 Protecting food security in the face of COVID-19