By Nic Maclellan in Funafuti

A giant crane hoists the flagpoles into place outside Funafuti’s Sir Tomasi Puapua Convention Centre. Four go up, with another fourteen to go. Tuvalu is getting ready to host the 18 member states of the Pacific Islands Forum.

Around town, workers are putting the finishing touches to new accommodation, kids are shooing dogs off the airport runway, and women are preparing food, flowers and mats. A carver has almost finished the nameplates – shaped like a canoe oar – that will mark the seats for delegations from Australia, New Zealand and sixteen island countries and territories.

“I believe we’re ready”, said Prime Minister Enele Sopoaga. “It’s been a big job, but our people are ready to host the leaders of the Pacific.”

It’s a major exercise for the Polynesian nation of just 11,000 people. Accommodation is at a premium, with Forum delegations joined by representatives from 18 Forum Dialogue Partners, regional organisations, media and civil society groups. Hercules aircraft will ferry delegates from Nadi over the weekend, to support the limited number of commercial flights into the small atoll nation.

There’s a lot of international interest in the annual leaders’ meeting, at a time when regional geopolitics is becoming more heated and complex.

Australia is “stepping up” and New Zealand “resetting” its relationship with Forum island countries. India wants to be an Indo-Pacific player, while the European Union is seeking a new relationship with island countries through a “post-Cotonou” treaty. Taiwan – aligned with host nation Tuvalu – seeks support for greater UN recognition, while the People’s Republic of China comes bearing gifts (and flexing its muscles, joining Indonesia to abstain from a recent resolution at the UN General Assembly on enhancing UN cooperation with the Forum). The United States is sending a large delegation to Funafuti, pledging its commitment to the region and hoping that people have forgotten President Trump is withdrawing from the Paris Agreement on Climate Change.

Meanwhile, island leaders have their own agenda and a number of sensitive topics to resolve.

At the Apia leaders’ meeting in 2017, the Forum launched a “Blue Pacific” agenda, seeking to develop a regional program on development and sustainability in the ocean environment. This week’s meeting will discuss the development of a “2050 Blue Pacific Strategy”, to look forward on crucial issues around climate, ocean resources, maritime boundaries and fisheries.

Tuvalu’s nine atolls are just metres above sea level, and Prime Minister Enele Sopoaga will showcase climate change as the centrepiece of the meeting. On Monday, Tuvalu will host a Sautalaga dialogue on climate change, with experts addressing loss and damage, the 2018 IPCC Special Report on 1.5°C and the ongoing need for climate finance to address the adverse effects of climate change.

The Tuvalu government has long been promoting a Pacific Island Countries’ Climate Insurance Facility for Smaller Islands States (SIS), to develop regional insurance mechanisms and assist countries to deal with the effects of cyclones, disasters and the slow onset effects of global warming. The eight SIS leaders meet in caucus on Tuesday morning.

A high-level technical working group, including Cook Islands, Samoa, Palau, Fiji and New Zealand has also been refining a proposal for a Pacific Resilience Facility. This regional fund would allocate risk-financing to assist national governments, private sector and local communities to invest in resilience initiatives.

Thursday’s leaders’ retreat, to be held at the Kainaki II Falekaupule (meeting house), will be a first for both Australian Prime Minister Scott Morrison and Fiji Prime Minister Voreqe Bainimarama. Both will no doubt contribute to the discussion in a lively manner!

After recent visits to Fiji, Vanuatu, and Solomon Islands, Morrison is fond of talking about Australia’s “vuvale” (family) relationship with the Pacific. However, all Forum island countries are looking to widen the security agenda to take account of the existential threat of climate change. Last year’s summit in Nauru issued the Boe Declaration, which recognised that – amongst a range of traditional security concerns – climate change was “the single greatest threat to the livelihoods, security and wellbeing of the peoples of the Pacific.”

The Suva-based Forum Secretariat has now developed a draft Action Plan to implement the Boe Declaration. But already, the gap between island priorities and Australia’s position on climate action is widening.

Last month’s Pacific Island Development Forum (PIDF) summit in Fiji issued the “Nadi Bay Declaration on the Climate Change Crisis in the Pacific.” As PIDF chair, Prime Minister Bainimarama will champion the declaration’s proposals for urgent action on the climate emergency, including calls for “coal producers to immediately cease any new mining of coal and develop a strategy for a decadal phase-out and closure of all existing coal production” and “to take immediate measures to relinquish the subsidies to fossil fuel production.”

These are proposals that Canberra will not accept as Forum policy, with the Morrison government currently supporting local and overseas corporations to open up new coal fields in Queensland’s Galilee Basin.

The Nadi Declaration also calls for “relevant parties to the Kyoto Protocol” (i.e. Australia and Russia) “to refrain from using ‘carryover credits’ as an abatement for the additional Paris Agreement emissions reduction targets.” Even before Prime Minister Morrison arrives in Tuvalu, this proposal has already been rejected by his government ministers.

There are divisions too on climate finance. Tuvalu is one of many Forum island countries to benefit from funding from the Green Climate Fund (GCF), a global mechanism to provide climate finance to developing countries for climate mitigation and adaptation. In Funafuti, island leaders will promote discussion about next year’s GCF replenishment round, seeking to top up the $10 billion fund with new finance from OECD nations. However, Australia and the United States have both announced that they will not contribute more funding to the GCF, despite pledges from past administrations.

UN Secretary General Antonio Guterres made an unprecedented visit to the Pacific last May, as part of his agenda on UN reform and climate action. At their meeting in July, Forum Foreign Ministers recommended that “leaders issue a high-level statement or declaration on climate change for the UN Secretary General’s Climate Action Summit”, to be held in New York next month. But given the gulf between Australia and Forum island countries on the need for greater action, a draft Forum declaration has already been through the wringer in several versions. Forum officials met this week in Suva to try and find compromise language to keep everyone happy, but it’s likely the problem will be handballed to the leaders.

Speaking to the plenary of the PIDF summit on 30 July, Prime Minister Bainimarama suggested there will be tough talk at the Forum: “We should not accept anything less than concrete commitments to curb greenhouse gas emissions in line with the most ambitious aspirations of the Paris Agreement. We cannot allow climate commitments to be watered down at a meeting hosted in a nation whose very existence is threatened by the rising waters lapping at its shores.”

The legacies of nuclear testing, unexploded ordinance and marine pollution will be discussed again in Funafuti. Marshall Islands is concerned about new scientific studies showing ongoing radioactive contamination in foodstuffs in the RMI’s northern atolls, while Solomon Islands has been battling the devastation of an oil spill from a tanker accident in Rennel and Bellona. Tuvalu has declared the 50th Forum meeting as “plastics-free” to highlight the damage to the marine environment of single-use plastics.

In July, Forum Foreign Ministers proposed further action on the radioactive legacies of nuclear testing. There were also tentative moves to investigate how the 1985 Rarotonga Treaty for a South Pacific Nuclear Free Zone might be modernised.

Once again, the Morrison government is taking a different position to most of Australia’s neighbours in the Pacific and ASEAN. Unlike New Zealand and many Forum island countries, Australia has refused to sign the new Treaty on the Prohibition of Nuclear Weapons (TPNW). Last December, NZ Prime Minister Jacinda Ardern hosted a meeting of Pacific signatories, seeking to encourage more Forum member countries to sign and ratify the nuclear abolition initiative (The TPNW will enter into force with fifty ratifications, and is already halfway towards that number, with Samoa, Palau, Vanuatu, New Zealand and Cook Islands amongst the supporters).

In Canberra, however, members of the Coalition government are promoting a Senate inquiry into establishing a nuclear industry in Australia. Senior security analysts have called for a debate over whether Australia should acquire nuclear weapons, concerned that the United States may one day withdraw its nuclear umbrella from Asia-Pacific allies. Given Australia is a signatory to the Rarotonga Treaty, which bans the development of nuclear weapons, it seems Canberra is once again swimming against the regional tide!

At a time of growing trade and political tensions between the United States and China, Scott Morrison wants Australia to be recognised as the primary security partner for the region, and seeks further integration of the Australian and island economies. The Australian government has been promoting a new Pacific Fusion Centre and expanded support for maritime surveillance, police training and intelligence sharing, but other security and human rights concerns remain on the Forum agenda.

Bougainville is moving towards a referendum on self-determination, and the French Pacific dependency of New Caledonia is likely to hold a second referendum in 2020 (newly elected President Thierry Santa will attend his first leaders’ meeting in Funafuti, seeking closer ties with independent neighbours).

This week, however, discussion on decolonisation, sovereignty and human rights will focus on West Papua.

With members like Australia, Papua New Guinea and Fiji pressing Indonesia’s case for sovereignty over West Papua, the Forum has focussed instead on promoting dialogue between Jakarta and the United Liberation Movement of West Papua, while calling for action on ongoing human rights violations by Indonesian police and military forces. With strong lobbying from Vanuatu Foreign Minister Ralph Regenvanu, the Forum Foreign Ministers Meeting recommended to “strongly encourage” Indonesia to finalise the timing of a visit to West Papua by the UN High Commissioner for Human Rights.

This debate on self-determination in Bougainville, Kanaky-New Caledonia and West Papua will continue beyond Funafuti, with Vanuatu scheduled to host the 2020 Forum on the 40th anniversary of its independence from Britain and France. Fiji has also put in a bid to host the 2021 summit, and so, after this week’s summit in Funafuti, regional debate on global warming will keep getting hotter. 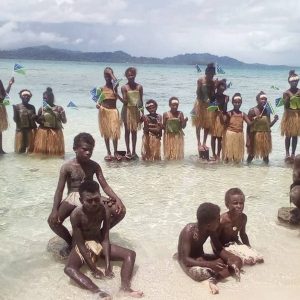 The Pacific looks to Glasgow

What will the Pacific islands region be prioritising at the COP26 climate talks? By Dr 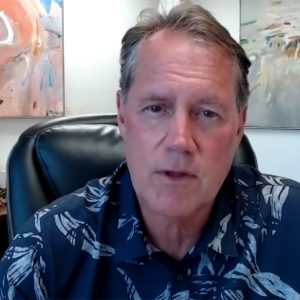 US Rep. Ed Case has urged members of the Pacific Islands Forum to remain united.

Climate change is widespread, rapid, and intensifying, and some trends are now irreversible, at least