In September, Fiame resigned from government and ended her affiliation with the ruling Human Rights Protection Party (HRPP) over three controversial bills that would set up an autonomous Samoan Land and Titles Court. It means she will contest the April 2021 election with another party for the first time in her political career.

The bills at the heart of her decision have fomented political turmoil in Samoa all year. The Judicature Bill 2020, Lands and Titles Bill 2020 and the Constitutional Amendment Bill 2020  would together create an autonomous Land and Titles Court (LTC) which would operate in parallel to the existing criminal and civil courts, and have equal standing to those courts.

The bills would give official recognition to village councils says Samoa’s government. Under the changes, the Land and Titles Court system would have its own court of appeal (rather than appeals being directed to the Supreme Court as is currently the case), and would have “supreme authority over the subject of Samoan customs and usages”, including title succession. The government-appointed Samoa Judiciary Service Commission would also have the power to dismiss judges under the changes, creating concern that this leaves room for political interference.

The Lands and Titles Court was first recommended during a 2016 inquiry into the functioning of Samoa’s courts, and in particular the backlog of cases relating to lands and titles. A November 2016 Asian Development Bank Report and Recommendation of the President to the Board of Directors stated that “poorly defined property rights” was amongst the barriers to private sector development. More than 80% of Samoa’s land is customarily owned.

The President of the Land and Titles Court, Fepulea’i Atila Ropati supports the bills, however the forces arrayed against them are diverse, and include the Ombudsman Maiava Iulai Toma, who says it will have “injurious consequences” on fundamental freedoms, judges and Supreme Court Justices, lawyers, a former Attorney General, and several senior matai (chiefs). Former head of state Tui Atua Tupua Tamasese Efi says he is concerned the bill will enable the sale of land to fill government coffers and fund government debt and infrastructure projects.

The Samoa First and Samoa National Democratic parties have called for the bills to be delayed and the Samoa Law Society has been vocal in its criticism of the Bill. There has also been international criticism from the New Zealand Law Society and the International Bar Association.

But it is within the ranks of the ruling HRPP that the bills have caused the most disruption. Former parliamentary speaker and cabinet minister, La’auli Leuatea Polataivao Schmidt quit the party in dissent. Another MP, Faumuina Wayne Fong, was sacked for his opposition.

Fiame’s concerns over the bills are by now well documented. She is concerned that it will establish two court systems and two authorities, creating “so much possibility for conflict, for grey areas and so forth. I don’t think it has been well thought out.” She is also worried that there is no Samoan jurisprudence to base a new court and system on. 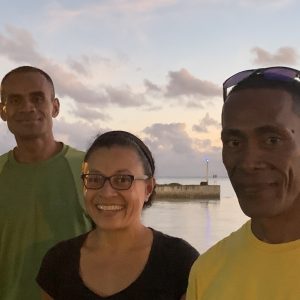 After paddling, hiking, sailing, biking and climbing as part of the World’s Toughest Race: Eco