The global coronavirus pandemic has pushed climate change off the front pages, but the challenge of responding to the climate emergency has not disappeared.

Global emissions of greenhouse gases will likely drop in coming months, as air travel is reduced, international trade falters and many countries prepare for economic recession.
But later this year, governments must decide how to resume global negotiations to implement the 2015 Paris Agreement on Climate Change. The next Conference of the Parties (COP) to the UN Framework Convention on Climate Change (UNFCCC) is scheduled for Glasgow, Scotland, in November this year.

If governments come together on schedule, the battle will resume over Australia’s proposal to use “carryover credits” to meet its targets to reduce greenhouse gas emissions. As the largest member of the Pacific Islands Forum, Australia stands alone in the belief that it can meet its Paris Agreement target for emissions reduction by using credits obtained under the Kyoto Protocol, when it ends.

UNDERSTANDING THE NUMBERS
The measurement of emissions has been debated since the 1997 adoption of the Kyoto Protocol to the UNFCCC. Coming into force in 2005, Kyoto’s first commitment period ran from 2008 to 2012, with a second commitment period from 2013 until this year. From 2020, the provisions of the Paris Agreement on Climate Change come into play.

Unlike Kyoto, which set binding emissions reduction targets for just 36 industrialised countries and the European Union, the Paris Agreement is legally binding for 194 states, both developed and developing; the United States under President Donald Trump is the only nation that has announced its withdrawal after signing the treaty. Under the Paris Agreement, countries make a voluntary emissions reduction commitment – known as a Nationally Determined Contribution – with a target set for 2030.

The debate over emissions reductions and carryover credits can be confusing, as countries use different baselines to set their targets. Some commitments to reduce emissions include all sectors of the economy, while others exclude certain sectors (agriculture, land clearing and deforestation, transport, energy etc). Australia’s Department of Foreign Affairs and Trade (DFAT) states: “Under the Paris Agreement, Australia has committed to reduce emissions by 26-28 per cent below 2005 levels by 2030. This builds on our target under the Kyoto Protocol to reduce emissions by five per cent below 2000 levels by 2020.”

At the 2019 Pacific Islands Forum in Tuvalu, Prime Minister Morrison repeatedly stressed that Australia is on track to “meet and beat” these Kyoto and Paris targets. This was reaffirmed in Australia’s official statement to COP25 in Madrid, when Minister for Energy and Emissions Reduction Angus Taylor said: “Our recently released forecasts say that we expect to beat our 2020 targets by 411 million tonnes, which is around 80 per cent of a full year of emissions.”

This magic figure of 411 million tonnes comes from Canberra’s latest official emissions projections, released in December 2019. They state that Australia went beyond its target for the first commitment period of the Kyoto Protocol (2008–2012), gaining credit for 128 million tonnes of Co2 equivalent (Mt CO2-e). Further emissions reductions in the second Kyoto period (2013-2020) bring the total credits to 411 million tonnes.

There are two key reasons that Australia went beyond its Kyoto targets. Firstly, Australia had very high domestic emissions from deforestation in 1990, the baseline year to measure targets. With reduced land clearing and deforestation in subsequent years, overall emissions reduced without the need to cut as much greenhouse gas from coalfired power stations or energy-intensive manufacturing industries like aluminium and cement.

The second source of credits comes from tough Australian diplomatic tactics during the Kyoto negotiations. Instead of a reduction of emissions, the Howard government won  an increase of 8 per cent in its emissions in the first Kyoto commitment period. For the second Kyoto period, only a minimal 0.5 per cent reduction was required. With far less ambitious targets than other comparable developed countries, Australia is now claiming to have “overachieved.”

In the real world, however, the actual reduction of Australian greenhouse gas emissions is projected to be 14-16 per cent below 2005 levels by 2030, rather than the official target of 26-28 per cent. In order to “meet and beat” the Paris Agreement target, therefore, Australia must use some or all of the Kyoto-era credits.

AUSTRALIAN CHEATING
The government’s policies on Kyoto credits are backed by the coal mining industry, which is seeking to expand rather than reduce operations in coming years. The Minerals Council of Australia has argued that “the use of Kyoto carryover credits has long been accepted and is allowable under the Paris Agreement”.

Politically, Australia is isolated from most international opinion on this issue. While Russia and Ukraine have suggested they might use these credits, all major OECD countries – Britain, Germany, Sweden, Denmark, the Netherlands, France, Norway and others – have expressly ruled out their use. Last October, Australian Department of Environment and Energy officials admitted to a Senate hearing: “We are not aware of other countries that are intending to use carry over. Just Australia.”

Professor Frank Jotzo of the Australian National University’s Crawford School of Public Policy is a leading climate policy analyst. For COP25, Jotzo was critical of the proposed use of Kyoto carryover credits: “We are the only country planning to ‘carry over.’ Almost all countries that care are opposed to it. It reminds the world of the ‘Australia clause’ which the Howard government pushed through at the 1997 Kyoto summit, allowing Australia to count land-use change reductions. It is what created the Kyoto carry-over credits in the first place.”

By themselves, Australian use of carryover credits wouldn’t break the Paris Agreement. However globally, there are billions of tonnes of credits around the world generated during the Kyoto years. Many climate analysts are concerned that Australian efforts to water down its climate targets through accounting loopholes will only encourage other major countries like Russia, Brazil and China to follow suit.

Christiana Figueres, UNFCCC executive secretary between 2010 to 2016, visited Australia in March and accused the Morrison government of “cheating” on its emissions targets.

“If you go as a tennis player to the Australian Open, and you get your final score and your final standing, do you then progress to Wimbledon and pick up the scores that you had from the Australian Open? It just doesn’t make any sense,” she said. “It is not legal, it is not correct, it is not moral. It is cheating, period. When you finish one tournament – and the Kyoto Protocol has finished – then you start the next. But you do not pull something from the previous efforts and the previous regulatory framework to the next one.”

PACIFIC OPPOSES CREDITS
Pacific governments have joined other developing states to condemn any use of Kyoto credits to reach Paris targets. The 2019 summit of the Pacific Islands Development Forum (PIDF)
in Nadi called on “relevant parties to the Kyoto Protocol to refrain from using ‘carryover credits’ as an abatement for the additional Paris Agreement emissions reduction targets.”

Last November at COP25 in Madrid, developing countries tried to include new text into the rulebook for the Paris Agreement that would ban the use of Kyoto carryover credits. During the negotiations, this ban was supported by three major negotiating blocs that include many Small Island Developing States: the Alliance of Small Island States (AOSIS), the Least Developed Countries group (LDCs) and the independent alliance of Latin America and the Caribbean.

However, the UNFCCC negotiations work on consensus, and these changes to the rulebook were not enacted in Madrid– they’ll be discussed again at the next UNFCCC meeting in June and COP26 in Glasgow.

In the final hours of the Madrid conference, Pacific delegations joined Germany, France, Britain, and other nations to condemn efforts by Brazil and Australia to weaken carbon markets. New Zealand, Marshall Islands, Vanuatu, Cook Islands and Fiji were amongst a group of 27 countries that issued the ‘San Jose Principles for High Ambition and Integrity in International Carbon Markets.’ Amongst 11 measures, these San Jose principles expressly “prohibit the use of pre2020 units, Kyoto units and allowances, and any underlying reductions toward Paris Agreement and other international goals.”

Instead of reliance on past efforts, ANU’s Professor Frank Jotzo has called for new government-to-government initiatives, creating a system with neighbouring countries for sharing the credit for bilateral initiatives to cut emissions: “Combined with meaningful action to cut emissions at home, it would signal that Australian ingenuity can be used to address climate change, not just for creative accounting. As the developed country most affected by climate change, it is in our interest to lead by example, not to be seen as a recalcitrant.”

The future of this debate is in the wind. The current global crisis around the COVID-19 coronavirus involves economic and social effects that make the future of climate policy hard to predict. Even so, governments around the world are adopting tactics that will be required to respond to the climate emergency; drawing on the advice of scientific experts rather than ideologies prioritising the health and wellbeing of citizens over existing priorities on debt and deficit, massive financial support to industries affected by the crisis, establishing “whole of government” taskforces and even governments of national unity.

Will we slip back to business as usual on climate policy, or will the experience of working together on COVID-19 provide a model for national and global co-operation in response to the ongoing climate emergency? 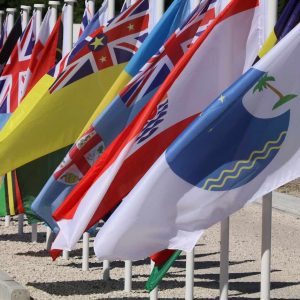 What is to become of Pacific regionalism

In the September/October 2019 issue of this magazine, I reflected on the ‘Death of Pacific 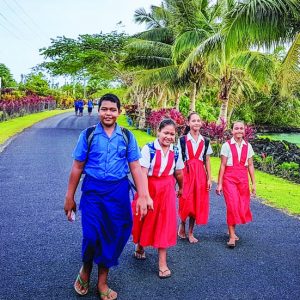 “It’s within our culture and religion to  discipline our children physically, but sometimes we don’t 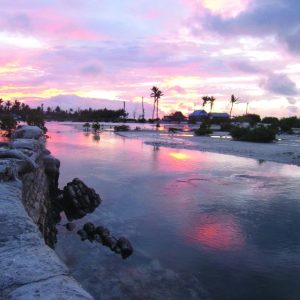 For the Pacific Islands Forum (PIF), the disappointment of COP25 was that the conference attendees