How will Vanuatu ride out COVID and cyclones

There was no social distancing evident as tens of thousands of Vanuatu citizens marched through the capital to celebrate the nation’s 40th Independence Anniversary at the end of last month. Vanuatu is one of just eleven countries (at the time of writing) to record no coronavirus cases, so joyful celebrations were unfettered by crowd limits or stringent sanitation protocols.

Vanuatu gained its independence from Britain and France on July 30, 1980. Reflecting on that time, independence figure Pastor Sethy Regenvanu said 40 years ago there were many factors that separated them,  but that the people of Vanuatu had always been independent as “before white people came to Vanuatu” we were…relying on our subsidence agriculture and our way of life, culture and customs.”

The 40th birthday celebrations began with the solemn handing of the Vanuatu flag from the family of first Prime Minister, Father Walter Lini, to successive Prime Ministers or their families, in chronological order, ending with the recently-elected PM Bob Loughman.

Loughman received the baton as the country meets the twin challenges of COVID-19 and Cyclone Harold-induced economic trouble.

Vanuatu is due to ‘graduate’ from Least Developed Country (LDC) status at the end of this year. Loughman is determined to pursue the process (which has been delayed three times already) despite the stresses of COVID and cyclones. LDC status is designed to support countries facing deep obstacles to economic advancement. Graduation means that while they may still receive aid, they should no longer need maximum concessionary treatment from development partners.

An ESCAP paper last year suggested Vanuatu’s successful graduation is a significant achievement which would require a well-informed transition strategy, and “marks the start of what will be a potentially more challenging phase of the nation’s development journey.” The paper says attaining funding assistance will be based on maximising impact and leveraging private sector investment.

Pre-COVID and cyclone, Vanuatu’s economy  was projected to grow by 3.4% but the forecast now is a contraction to 0.6%. In an update just released, the Ministry of Finance says growth is expected to remain positive because of Government’s TC Harold recovery efforts, the Economic Stimulus Package and donor support, plus implementation of  infrastructure projects and the 11th European Development Fund. Medium term projections are also robust, driven by agriculture and industry.

Vanuatu’s strong fiscal position and successive years of budget surpluses means it should be able to fund its US$37 million stimulus measures from its own reserves. While tax revenue for the first half of the year is down 1.8% on the same period in 2019, revenue from the honorary citizenship program was up 32.3% over the first six months of last year, netting Vt 7,094.2 million (US$62,000). This means the 2020 target has already been exceeded. 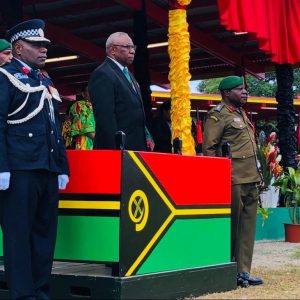 COVID-19 to bring ‘prosperity’ to Vanuatu