Trouble in the family

JUST before the 50th Pacific Islands Forum, the Wallabies thrashed the All Blacks 47-26 in the first game of the Bledisloe Cup. As a rugby fan, Australian Prime Minister Scott Morrison might have taken this as a good omen, as he headed to his first Forum leaders’ retreat in Funafuti, Tuvalu. Bad mistake.

Straight after the Forum, Fiji Prime Minister Voreqe Bainimarama rushed home to watch the broadcast of the deciding game at Eden Park. After a tense week in Tuvalu, one suspects the Fiji leader, a confirmed Wallabies fan, was cheering for the All Blacks. They thrashed Australia 36-0.

It’s an appropriate symbol for the thrashing of Australia’s climate policies in the 18-member regional organisation. In Funafuti, the score was 17-1.

Much of the media coverage has focussed on Australia’s efforts to censor the language of the final Forum communique, as if this is new or that Australia is the only country pushing its own agenda (shock, horror, the sky is blue!) But despite the watered-down language, there are elements in the final Kainaki II climate declaration that will horrify Morrison’s conservative backbench.

Communiques come and go, but the key feature of the leaders’ retreat is that it provides a chance for Presidents and Prime Ministers to meet face to face, build friendships, or at least come to a practical working relationship. On this basis, Morrison’s actions in Tuvalu were a disaster.

Listening to post-retreat comments from Pacific leaders and officials, Morrison’s ham-fisted interventions on climate policy have alienated many of his island counterparts. Having seen off successive Australian Prime Ministers over the last decade – Rudd, Gillard, Rudd again, Abbott, Turnbull and now Morrison – old-timers like Samoa’s Tuilaepa Sailele Malielegaoi don’t take kindly to being lectured by a first-time participant. Speaking to The Guardian newspaper around the grog bowl after the retreat, Fiji Prime Minister Voreqe Bainimarama blasted Morrison as “very insulting, very condescending, not good for the relationship.”

“After yesterday’s meeting I gathered he was here only to make sure that the Australian policies were upheld by the Pacific island nations,” Bainimarama said. “I thought Morrison was a good friend of mine; apparently not. The Prime Minister at one stage, because he was apparently [backed] into a corner by the leaders, came up with how much money Australia have been giving to the Pacific. He said: ‘I want that stated. I want that on the record.’ Very insulting.”

New Zealand’s Jacinda Ardern, in contrast, kept her head down. As leaders entered the retreat, she strolled alongside Bainimarama and sat beside him during the meeting. The Fijian leader later tweeted: “When combatting climate change, it’s good to have an ally like New Zealand in your corner. Together we can save Tuvalu, the Pacific and the world. Vinaka vakalevu for the passion you bring to the fight.”

Point noted in both Wellington and Canberra. Morrison’s favourite radio shock jock Alan Jones said the Australian Prime Minister should “shove a shock down her throat” (after an advertising boycott, Jones later grovelled and apologised to the NZ leader).

In the past, Forum leaders used to hold back on their public criticism of Australian and New Zealand behaviour at the Forum, recognising that we are all bound together by geography and history. Those days are gone. As Australia “steps-up” and New Zealand “re-sets” their engagement with the region, the old paternalistic rhetoric about working with “our backyard” and “the Pacific family” doesn’t wash anymore.

In the new geo-political context, Forum Island leaders are being wooed by a range of old friends such as Japan and the European Union, as well as new partners: China with loans and infrastructure; Cuba with medical training; India with technology transfers; Germany with technical assistance and funding for development – this list goes on. Today, Australia and New Zealand are not the only game in town and Pacific leaders have learnt to leverage these alternatives. Canberra wants to be the donor of choice, but China has deep pockets.

A week before the Tuvalu summit, a PNG press release citing Prime Minister James Marape said that Port Moresby was seeking to refinance its national debt from China. Marape later walked back from the statement, but the point was made. A flurry of cables between Canberra, Tokyo and Washington will help PNG negotiators talk to the World Bank and Asian Development Bank, and get a much better deal to address PNG’s debt pressures.

Community support
The Forum meeting in Funafuti was also important for host Enele Sopoaga, who faces national elections in September. Tuvalu hasn’t hosted the leaders’ meeting since 1984 and the whole community had turned out to assist the international delegations. It was a very positive and enthusiastic welcome to the atoll nation. It follows the unprecedented visit to Tuvalu last May by UN Secretary General Antonio Guterres. Stopping off as well in Fiji, Vanuatu and New Zealand, Guterres was photographed for the cover of Time magazine, with water lapping around his legs. At the Forum, island leaders were pushing for the strongest possible language in the final communique and climate declaration, to take to next month’s UN Secretary General’s Climate Action Summit in New York.

Last year’s Forum in Nauru was marked by tense exchanges, including a Chinese walkout of the Forum partner dialogue, American bluster from the US Secretary of the Interior, the police detention of a NZ journalist for talking to refugees and more. This year the tone was more low-key, despite ongoing disputes over China/Taiwan and Trump’s withdrawal from the Paris Agreement. The Indonesian delegation was disappointed that all Forum leaders backed Vanuatu’s call for stronger action by Indonesia on human rights abuses in West Papua, encouraging Jakarta to set a date for a visit by the UN Human Rights Commissioner.

Australia’s big announcement in Tuvalu was a pledge of A$500 million over five years from 2020 to help island nations invest in renewable energy and climate and disaster resilience. But Forum island leaders are angry that the pledge is not new and additional funding, but simply drawn from existing aid funds.

Australian aid to the Pacific has been “stepped up” under the Coalition government – but only by slashing aid to Africa and South East Asia. Australia’s official development assistance (ODA) is currently 0.22 per cent of Gross National Income (GNI) and will continue to fall in coming years. Ewen Macdonald, the new head of the Office of the Pacific within Australia’s Department of Foreign Affairs and Trade (DFAT) told a Senate Estimates Committee last year: “In terms of volume of money it is not the lowest, but in terms of GNI, it is the lowest since records were kept in 1974.”

Speaking after the Smaller Island States meeting in Funafuti, Sopoaga welcomed Australian financial support, but stressed: “No matter how much money you put on the table, it doesn’t give you the excuse not to do the right thing – that is, cutting down your emissions, including not opening your coal mines.”

Marshall Islands President Hilda Heine told Islands Business: “We’re discouraged and disappointed at the fact that Australia is still actively using coal for their own power generation, and it looks like that is something that is going to continue into the future.”

Climate funding
British Prime Minister Boris Johnston once claimed that the United Kingdom could “have our cake and eat it” through Brexit, as it negotiates Britain’s departure from the European Union: “My policy on cake is pro having it and pro eating it.”

Pacific island leaders also want to have their cake and eat it. They welcome the support – financial, human, diplomatic and technical – from Australia, New Zealand and other development partners. But they also want Scott Morrison and Jacinda Ardern to respond to their concerns about the existential threat of climate change.

The declaration from the Sautalaga Climate Dialogue, held the day before the official Forum, noted “the significant role that the GCF plays in supporting developing countries in their efforts to address climate change. We call for a prompt, ambitious and successful replenishment of the GCF.”

Islands Business asked Prime Minister Morrison if the pleas of island leaders had persuaded him to change his government’s policy, refusing to make further financial contributions to the GCF. He replied: “No, it hasn’t, because I just want to invest directly in helping the Pacific family here. I don’t need to send a cheque via Geneva or New York or wherever it has to go.”

Given Australia was previously co-chair of the global climate fund, Morrison knows very well the GCF Secretariat is actually in South Korea. But abusing the United Nations and multi-lateral agencies plays well to conservative members of his own party and panders to Australian voters who support Pauline Hanson’ One Nation.

Pacific family
Scott Morrison is stuck between a rock and a hard place. He is stepping up efforts to maintain Australia’s long-standing policy of strategic denial in the islands. Members of Canberra’s hard-headed security community are worried a hostile power (i.e. China) could gain the political or economic influence that might open the way for island states to shift support from the Western bloc, or establish a military base that would transform regional security.

Morrison has made personal visits to Fiji, Solomon Islands, Vanuatu and now Tuvalu and the Prime Minister often repeats the slogan that Australia is part of “the Pacific family.” But regardless of the “step up”, the Funafuti Forum exposed many policy rifts between Australia and its island neighbours.

Successive Coalition governments elected since 2013 have badly damaged institutions that play a practical role in engagement with the region. The gutting of Radio Australia has allowed China to use their shortwave broadcasting frequencies. The takeover of AusAID by DFAT lost a generation of development expertise, which is only now being rebuilt through the Office of the Pacific. Volunteer programs lost funding; then newly announced funds came with increased DFAT micro-management. The CSIRO and Bureau of Meteorology lost climate-related funding, vital for research on cyclones and disasters.

After the Forum, former Kiribati President Anote Tong revived the debate on whether to shun Australia within the Forum: “Should there be sanctions imposed? I think that’s a question that leaders are no doubt asking themselves. I think these things have got to be expressed. It’s not only in my mind, I’m sure it’s in everybody else’s mind. I’m surprised Australia is not seeing this, or they’re ignoring it, which is the height of arrogance.”

Australia won’t be going anywhere, but the next three Forum leaders’ meetings will be hosted by Vanuatu (2020), Fiji (2021) and Kiribati (2022). If Morrison hasn’t got the climate message in Tuvalu, he’ll have plenty of opportunity to understand in the next few years. 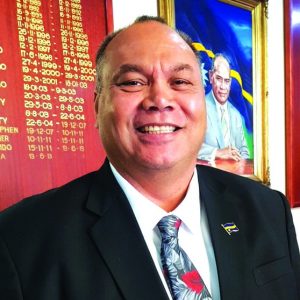