THE alignment of Step Up, Australia’s foreign policy direction in the Pacific and its New Zealand equivalent, Pacific Reset, was acknowledged by both Prime Ministers Jacinda Ardern and Scott Morrison at their annual meeting in Auckland on 22 February 2019. The foreign policies align at various levels. For the most critical of all alignments in support of the Pacific Islands Forum’s Blue Pacific, New Zealand’s Reset is leading the way. Australia’s Step Up needs to do just that, or a second stumble will frustrate its good intentions.

Paragraph 18 of the Prime Ministers’ Joint Statement affirms this ‘strong alignment’. This represents a lateral alignment. However, the foreign policy directions are also aligned vertically to their respective national security policy statements. Australia’s Step Up is aligned to ‘The Foreign Policy White Paper’, while New Zealand’s Pacific Reset is aligned to the ‘Strategic Defence Policy Statement 2018’.

Further alignment, essentially the two policies’ raison d’?tre, is represented by their orientation to support the countries, territories and institutions of the Pacific, home of the two developed countries.

Pacific Reset’s approach is premised on five principles, namely: (i) To demonstrate a depth of understanding of the Pacific shaped by academic, community, civil society, and private sector expertise that exists in NZ; (ii) To exhibit friendship, including honesty, empathy, trust and respect. This means staying in frequent touch at a political level and having frank and open conversation when necessary; (iii) To strive for solutions of mutual
benefit when developing domestic and foreign policy with impacts on the Pacific. For example, pension portability, criminal deportations, climate change, labour mobility and health and education policy; (iv) To achieve collective ambition with Pacific partners and external actors on a shared understanding of what Pacific Island Countries and NZ are trying to achieve together; and (v) To seek sustainability by focusing on the region’s long-term goals, to play NZ’s part in promoting greater autonomy and resilience among NZ’s Pacific friends through improved economic and social achievement.

Australia’s Step Up is a commitment to a range of measures to strengthen the country’s engagement to support a more resilient region, including: (i) stronger partnership for economic growth – e.g. supporting infrastructure, labour mobility, PACER Plus; (ii) stronger partnership for security – e.g. Pacific Security College, The Pacific Fusion Centre and a range of defence, cyber, maritime, health security services; and (iii) stronger relationships between people, ranging from training, church, sports, travel, research and friendship initiatives.

The vertical alignments of the two countries’ foreign policy direction to their respective defence policy statements speak forcefully of an additional alignment. The prominence of security considerations brought on by how best to counter threats, especially that represented by China’s concerted advance into the Pacific, populated both security statements.

Such a scenario brings both foreign policy statements aligned with those of the Indo-Pacific, which is a geostrategic construct of the Quadrilateral (Quad) countries. This has been imposed onto the whole of the Pacific Ocean, reaching across Asia, the Indian sub-continent, Indian Ocean and right up to the eastern coastline of the African continent. Australia is one of the four architects of the Indo-Pacific. The others are US, Japan and India.

Australia and New Zealand have had consultations on, inter alia, Indo-Pacific. Additionally, the Joint Statement referred to above certainly has language reminiscent of the values and principles of Indo-Pacific. Australia’s alignment to Indo-Pacific is thus by design. That of New Zealand, being supportive, can be said to be by association.

Indo-Pacific is an enigma. Promotional releases by its architects, especially Australia and US, are riddled with contradictions. Professor Rory Medcalf, Head of the Australian National University (ANU) National Security College, for example, said last May that “an Indo-Pacific policy is not, by definition, inherently anti-China.” However, subsequent Australian statements continued their anti-China sentiments. So much so that China’s Ministry of Foreign Affairs spokesman Lu Kang had to ask “Australia to drop (its) ‘Cold War attitude.’

Even NZ has been in on the act. The Fiji Times reported last October that “Japan and NZ will work more closely on Pacific issues to make progress in the region amidst China’s influence in the area.”

To date, there have not been any formal consultations with either the Pacific Islands Forum Leaders or the PIF Secretariat’s Secretary General on Indo-Pacific, as far as I know. Both the former Chair of PIF, Samoan Prime Minister Sailele Tuilaepa Malielegaoi, and Secretary General Dame Meg Taylor, especially the latter, have indicated the lack of any consultation in their recent public engagements. Australia, who should be spearheading such a consultation being a PIF member, has been particularly lax. However, it has not been lax when consulting other metropolitan countries, remote from our shores, like the UK and France on this very subject.

The other Quad members are all PIF dialogue partners. None, however, has brought up the issue during any of the dialogue sessions. Japan, however, took the opportunity of its 2018 PALM summit, last May, to inform PIC Leaders. Note that this was only for information, not for consultation.

Solomon Islands academic Dr. Tarcisius Kabutaulaka, lamented, firstly, “the portrayal of PICs as having no agency in the relations that they forge.” Secondly, “the treatment of PICs as pawns in the power play-off between the larger countries.”

Dame Meg Taylor spoke recently at ANU of how the Pacific can maintain and strengthen its own strategic autonomy in the context of Indo-Pacific. This requires that the Pacific’s own “priorities are neither undermined through the breaking of our Pacific solidarity, nor appropriated by the narratives of others not of our region.”

Last February, when Dame Meg spoke at the University of the South Pacific in Port Vila she advanced “The China Alternative: Changing Regional Order in the Pacific Islands.” Essentially, she advocated the framing of such an alternative in the context of the Blue Pacific in order to secure future viability, prosperity and wellbeing. Further, she stressed PIF’s stance on being ‘Friends to All’.

The scenarios invoked by Dame Meg above provide the environment in which both NZ’s Pacific Reset and Australia’s Step Up are aligning to the Blue Pacific narrative.

In the first scenario, note that the muchtouted Pacific solidarity is beginning to break at the seams through Australia’s continued reluctance to consult on Indo-Pacific. Dr. Tess Newton Cain, having analysed the inner working of Australia’s Step Up, has already posed the prospect of it heading for a ‘stumble’. A second stumble is beckoning if Australia continues its faux pas.

The second scenario above requires a ‘pro-China’ stance. If this nomenclature proves too polemical, then consider it as ‘pro-Blue Pacific’, in the name of PIF’s strategic autonomy approach.

Of the two regional neighbours, NZ is showing the way forward here. NZ has already signed onto China’s Belt and Road Initiative, one of the nine PIF members who have signed. As it turns out, NZ meets much of the requirements of its Pacific Reset’s five principles by signing.

Pacific Reset has firmly stepped up to the challenge. 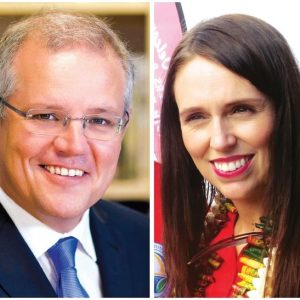 THE alignment of Step Up, Australia’s foreign policy direction in the Pacific and its New Zealand equivalent,