Give the Pacific a ‘fair go’

THE recent disparaging remarks made by Australia’s Environment Minister, Melissa Price, to former Kiribati President Anote Tong is a reminder of all that is bad about Australia and its views of the Pacific. That a serving Australian Cabinet minister would insult an esteemed regional leader and international climate change warrior and accuse him of being driven by money is a measure of the woman. And that she should accuse the Pacific of only being in the war on climate change for the money shows her lack of knowledge of the issue, the region and its people.

Price stands accused of walking up to Tong – a Nobel Peace Prize nominee – while he was dining with friends in a restaurant and saying: “I know why you’re here. It’s for the cash. For the Pacific it’s all about the cash. I have my cheque book here, how much do you want?”

This from a representative of a country which for decades has refused to ratify the Kyoto Protocol which would limit greenhouse gas emissions and guarantee a safer environment.

This from the representative of a country which continues to mine coal and contribute to the factories which keep global warming at dangerously high levels.

This from the representative of a country which for years has treated Pacific seasonal workers with disrespect, issuing them visas at a lower level than European backpackers.

For Tong and the Pacific, the battle against climate change has never been about the cash; the fight has always been about justice and dignity.

Price – as a dinky di Australian – should be familiar with the term “fair go” which means to treat people fairly or give them a reasonable chance.

On the world stage, Tong has appealed at every possible forum – the United Nations, the Commonwealth, among others – on behalf of the Pacific people for a fair go.

With the ocean rising rapidly and no end in site to global warming, Tong has led the charge for migration with dignity as the last possible option for his people.

Under his watch Kiribati negotiated the purchase of land in Fiji on which to grow food and provide refuge should the day come when the i-Kiribatis must relocate.

And Price’s Australia continues to pump carbon into the atmosphere with scant regard for the Pacific.

Under Tong’s leadership Kiribati has trained young people in seafaring and nursing skills to international level so that should the need arise they can find employment in Australia and New Zealand.

And Price’s Australia continues to argue that perhaps it need not reduce emissions to levels accepted in Paris in 2017 by the international community.

At no stage has Kiribati or Tong asked for charity or suggested that cash is the answer to the problems faced by his country, Tuvalu, the Marshall Islands and much of the Pacific. The Pacific people are not beggars. By her comments Price has implied that the region is lined up at the doors to Australia’s treasury, cap in hand, waiting for freebies. Nothing can be further from the truth.

We would not presume to speak for former President Tong. But on behalf of the Pacific people, we say this: The region does not want handouts from Australia. What we want is a reduction in carbon emissions so that global warming is reduced, and the Pacific can fight climate change. What we want is Australia’s support in the battle against global warming through a reduction in the sale of coal and the eventual closure of its mines.

In recent years Australia has fought to claw back its influence in the Pacific, a region which it has neglected for nigh on two decades in its efforts to become an international player. The United Nations and the War on Terror have been Australia’s focus for so long that it forgot the Pacific.

Now that China has found its way into the region, Australia has struggled to re-acquaint itself with its island neighbours. Price has dealt a heavy blow to any progress that has been made thus far. Her failure to apologise to Tong when the chance availed itself will be remembered for years.

If Australia wants to make friends in the Pacific, it would do well to rid itself of representatives like Price and replace them with individuals who understand the island people and their psyche.

The fight against climate change is real. For the Pacific this is a matter or urgency. This is an issue beyond money, charity or the much-vaunted cheque book of an Australian Cabinet minister.It is a battle for survival.

What the Pacific and Tong deserve immediately is something without price – an unreserved apology, 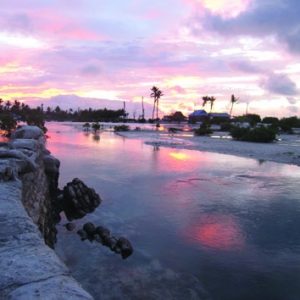 Report of hope for Pacific

As we are faced with darkness there is hope. The special report from the Inter-governmental