New Caledonians vote no to independence, but the FLNKS are still smiling

In a crucial referendum on self-determination, more than 141,000 New Caledonians went to the polls on 4 November to determine the political status of the French Pacific dependency. After twenty years transition under the 1998 Noumea Accord, the referendum
posed the question: “Do you want New Caledonia to accede to full sovereignty and become independent?”

In an unprecedented turnout, 56.7 per cent of registered voters decided to remain within the French Republic, while 43.3 per cent voted Yes for independence.

These bald figures, with a clear majority opposing full sovereignty, suggest a setback for New Caledonia’s independence coalition, the Front de Libération Nationale Kanak et Socialiste (FLNKS). In reality, the size of the Yes vote put smiles on the faces of independence leaders and supporters.

Daniel Goa is President of the Union Calédonienne (UC) party and spokesperson for the FLNKS. After the referendum, Goa thanked supporters and pledged to continue to another vote in 2020: “We lost on the numbers, but for us it’s a victory.”

“For the Kanak people, the first people, this is a great victory, as we have loudly and clearly expressed our perspective without ambiguity and without recourse,” he said. “Who now will contest the justice of our struggle, who now will challenge our very existence?”

In the aftermath of the referendum, everyone realises that the Kanak independence movement has new wind in its sails. They lost on referendum day, but defied all pre-poll predictions and showed that there is still overwhelming support for independence amongst the indigenous Kanak people (symbolically, in the northern tribe of Tiendanite, home of assassinated FLNKS leader Jean-Marie Tjibaou, 100 per cent of those voting said Yes).

“This large Yes vote reinforces our convictions,” Daniel Goa said. “We lacked just 9,000 votes to transform our dream into reality. Despite all the shackles we faced in getting our message out in the campaign, and the fear campaign launched by the other…. 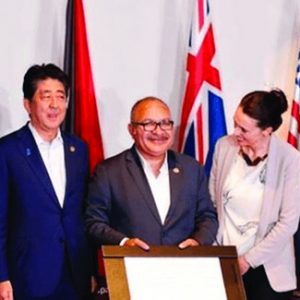