The acquisition of land on a large scale by ‘new’ Chinese in the Pacific region could potentially be a trigger for instability in the future, a new report has suggested.

Authored by Dr. Stewart Firth, a Research Fellow at the Australia National University’s Department of Pacific Affairs, College of Asia and the Pacific, the report is titled: ‘Instability in the Pacific Islands: A Status Report’ and was released in June by Lowly Institute, a Sydney-based independent policy think tank.

Apart from providing a general overview on the current socio-economic and political status in Pacific Island countries, the report dwelled specifically on six key areas said to have the potency for instability in the future.

One of these key areas is immigration, which singularly focused on the new wave of Chinese influx into the region and why this trend could be a ticking time bomb for social instability in this part of the world.

Making the distinction between ‘old Chinese’ in the region – these are Chinese descendant Pacific Islanders whose ancestors arrived a century or more ago – and ‘new Chinese,’ who are “‘sojourners’ with no intention of staying or becoming citizens,” the report said these ‘new Chinese’ typically use Pacific Islands as a foothold for entry into the more developed countries such as Australia, New Zealand and the United States.

Among this new group are the socalled ‘new entrepreneurial migrants’ who “typically arrive on tourist visas, pay bribes to immigration officials, or walk off fishing boats at Pacific ports.”

“Most are poorly educated, have no professional or trade qualifications, and could not legally enter Pacific Island countries. They start small trading concerns, investing in bakeries, low-end restaurants and clothing stores – trading activities usually reserved for Pacific Islanders. 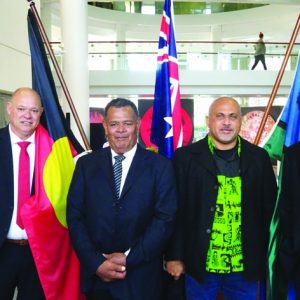 As New Caledonia moves closer to a referendum on self-determination on 4 November, Kanak leader Daniel