The Fijian Drua will mount its second Super Rugby Pacific campaign with six home games locked in for Fiji in 2023.

The Drua will host the Waratahs in Melbourne during the Super Round, which was announced last week. For its away games in 2023, the Drua will travel to Auckland, Brisbane, Dunedin, Canberra, Hamilton, Perth, and Sydney.

The Club has revealed the exact locations of its Fiji games in Suva and Lautoka. The team made a huge statement by winning two of its games in its debut season, while almost creating upsets against two of the best teams in the competition during their home matches in Fiji.

Fijian Drua CEO Brian Thorburn said: “It will be a fascinating 15 weeks of Super Rugby Pacific and we cannot wait to play six games right here in front of our Drua vuvale. We’re delighted with the draw which will see some of the competition’s best teams heading to our home, including both finalists from last year. We’re also happy that our amazing fans will get to witness the Crusaders, Melbourne Rebels, Blues, Hurricanes, Moana Pasifika, and Queensland Reds right here! A trip to Fiji now presents visiting teams with a daunting challenge on the field but a wonderful Fiji tourism experience for their fans off it.”

The competition will see all 12 teams play a total of 14 matches during the regular season, which includes the 11 round-robin fixtures plus three additional rivalry matches, that will yet again ignite the trans-Tasman and Pasifika rivalries like never before.

New Zealand Rugby CEO Mark Robinson said: “There is a real feeling that Super Rugby Pacific is ready for take-off after a successful, but COVID disrupted inaugural season. We saw massive potential on the field in 2022, but also some huge challenges off it, so to have a fully integrated and uninterrupted draw in 2023 is great news for the players and the fans. I think we are going to see one of Super Rugby’s most competitive seasons.”

Rugby Australia Chief Executive Andy Marinos said: “Being able to play regularly in front of home fans, and to travel across the Tasman and around the Pacific is massive for the competition, especially for fans, who can support their teams through a full home schedule. Everyone saw what Super Rugby Pacific had to offer in its first season and all 12 clubs have taken that excitement into the off-season and will be primed for a shot at the title in 2023.”

The opening weekend will also see Pasifika pride on the line as Moana Pasifika host the Fijian Drua at Mt Smart Stadium in Auckland in what will be the start of historic campaigns for last year’s two competition newcomers. 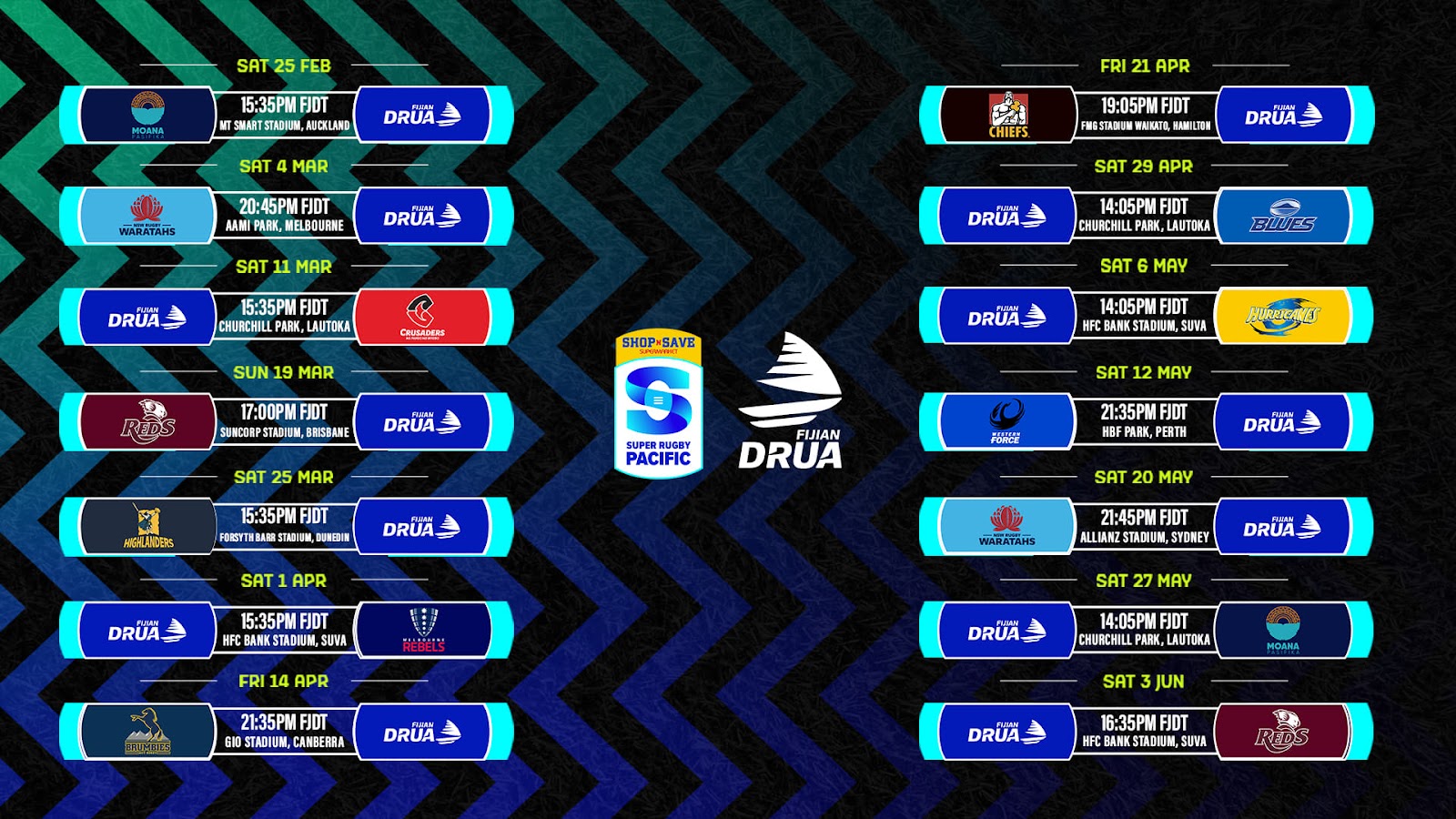 Meanwhile, the Fijian Drua has announced the appointment of Greg Fleming as the Club’s new Forwards Coach ahead of the 2023 Super Rugby Pacific season.

The 48-year-old will bolster the coaching staff led by Head Coach Mick Byrne.

Fleming comes with sixteen years of experience in coaching and player development after serving as the Manawatu Turbos Forwards & Defence Coach for the National Provincial Championship and the Mitre 10 competition.

He was part of the New Zealand Under 20 as a selector and scrum coach and had previously been the forwards coach for Japan’s top league club, NTT Docomo Red Hurricanes.

Fleming also served as a rugby development officer for Hawkes Bay Rugby Union from 2006 to 2010, before joining Manawatu as a Coach Development Manager.

Fleming starts with the Drua in the October pre-season window.

Toa Samoa: One for the history books