‘The Blue Pacific’ is touted by all and sundry as the collective ‘identity’ of Pacific Islands Forum (PIF) members. As such, ‘The Blue Pacific’ is the identity badge by which PIF’s particularity and uniqueness is determined. In analysing the components of ‘The Blue Pacific’ and how they have woven their influence and impact, or otherwise, on Pacific regionalism, it can be said that such an identity has fallen short in effectively determining PIF’s uniqueness and singularity. Regional unity, for example, has been deficient in spawning such uniqueness. Such a discrepancy may be viewed as a work in progress; and there is obviously further work to be done. As such, this article may present an opportunity to re-visit our identity for some re-working, desperately needed in the interest of Pacific regionalism and especially in the context of the proposed ‘2050 Strategy for the Blue Pacific Continent.’

The PIF has an uncanny voracity for planning and strategising. It raises questions of propriety and confidence. Not long ago, the region had the Pacific Plan. So much effort and resources were devoted to its development. That transformed into The Framework for Pacific Regionalism (FPR) after dissatisfaction was expressed regarding the Plan’s structural coherency, ownership and lack of implementation. It took an external high-powered committee that consulted widely to arrive at those findings. PIF Leaders then agreed to make the transformation.

After the 2019 Funafuti annual meeting of the Leaders last August, the 2050 Strategy for the Blue Pacific Continent was agreed upon. The PIF Secretariat has been mandated to provide the Terms of Reference, inclusive of the mandate to the Specialist Sub-Committee on Regionalism (SSCR), to the Leaders when they meet in 2020 in Vanuatu. The status and form of the FPR in the context of the 2050 Strategy for the Blue Pacific is a matter of speculation. Whatever it will be, there will be a period of readjustment. Naturally, this will impose a brake on Pacific regionalism. The hope of course is that there will be sufficient collective vigour in the region to drive regionalism forward. With the benefit of hindsight, it has to be said that the level of vigour needed this time around has to be of an unprecedented level if Pacific regionalism has to generate genuine meaning and benefits to its members, particularly the developing country and least developed country members.

Apart from questions of propriety and confidence as per above, it is prudent to also ask the question whether the fundamentals that we are presenting for reconfiguring our regionalism are in order. One of these is our identity, or what we perceive as our identity – ‘The Blue Pacific.’ Asking this question is common-sense. Our identity is a building block of our regionalism. Therefore, is ‘The Blue Pacific’, as conceived, consistent with the proposed 2050 Strategy for the Blue Pacific? Related questions also arise. For example, given that we may claim immediate stewardship of the Pacific Ocean because of our immediate geography, can we still claim autonomy given the shared utility of the Pacific Ocean globally?

The region’s articulation of ‘The Blue Pacific’ opens with what I may term as a chink in its armour. The region, collectively, has lost its potential of its shared stewardship and it wants to re-capture it. As an opening bat, it is  hardly inspirational nor aspirational. This is a statement that others outside the region may perceive as a general weakness on the part of the region, the Forum and its members; and it presents a situation that can be easily exploited.

We see already different forms of exploitation. Outside powers, including Pacific Rim powers, disregard the region’s agency to speak on issues important to us and with which we claim legitimacy. They don’t even bother to consult. They know better! Dr Tarcisius Kabutaulaka of the University of Hawai’i wrote about this in his paper: ‘China, Pacific Islands & The West’s Double Standards.’ He concluded that “PICs are treated as pawns in their power play-offs”; adding that ‘This is reminiscent of the Cold War era when the Oceania was often regarded as an Anglo-Franco-American lake and where western countries deployed a policy of ‘strategic denial.’

The Indo-Pacific strategy was imposed recently by the Quadrilateral (Quad) countries (US, India, Japan and Australia) onto the region without consultations. Japan, essentially as an afterthought, used the opportunity of its 2018 Pacific Leaders Meeting (PALM) summit just to inform Pacific Island Countries (PIC) Leaders of the imposition. It was not consultation. Australia, of all countries, consulted France and the UK on the other side of the globe about their respective engagement under the Indo-Pacific Strategy this side of the globe, but no consultation whatsoever with fellow Forum members except New Zealand, its fellow PIF’s developed country and OECD member.
It makes sense therefore that the introduction into our identity needs strengthening and reformulation. Clear heads need to come together to review the narrative of our identity. To open forcefully, not hinting at a chink in our armour, but with clear articulation of our premium strength that we want to celebrate and built upon and to which others feel obliged to pay respect and homage. The SSCR can launch such a review in preparation of its submission to the PIF Leader’s next meeting in Vanuatu.

Furthermore, any country in the world can claim shared ‘ocean resources’ when it comes to mining of seabed resources contained in international waters or trans-boundary waters. So, when non-PIF countries read in the region’s identity, expressions of ‘collective potential’, ‘shared stewardship’, ‘collective action’, they readily include themselves in those shared initiatives. Generally speaking, such a move with little invitation, to propel a collective initiative, is generally welcome. However, if the stated and unwritten interests of the new-comers (including geopolitics), overwhelm and frustrate those of the hosts and their respective autonomy, then it would be opportune to return to first base and undertake a re-think of our strategy and the fundamentals of that strategy.

The task is not going to be easy in reconceptualising the region’s identity. An identity is the outward expressions of one’s particularity and uniqueness. It assumes unity – unity of association and unity of purpose, to be particularly unique. The SSCR has its work cut out. The SSCR members will need to enlist the regional clout of our regional champions and the zenith of their own creativity to get mileage on this matter.

• The author is a former Fijian ambassador and Foreign
Minister and runs his own consultancy company in Suva, Fiji. 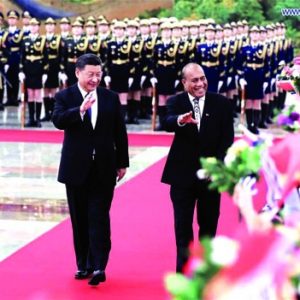 Comparing China’s and Taiwan’s aid to the Pacific

In September 2019, after 36 years, Solomon Islands severed its diplomatic relations with the Republic 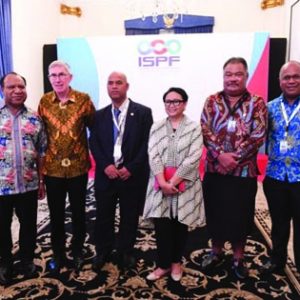 Indonesia’s Pacific elevation: Elevating what and who?