IN 2017 the Samoan Prime Minister, Tuilaepa Sailele Malielegaoi reintroduced the Criminal Libel Act to combat online anonymity and ‘ghost writers’ such as the infamous ‘Ole Palemia’. Reintroduction of the act, which had been abolished in 2013, was justified on the basis of protecting individuals from false and defamatory online allegations, and in the name of peace and harmony.

Then last year the Prime Minister threatened to shut down Facebook completely in Samoa because of what he termed as “gutless anonymous bloggers” and their continued allegations. This threat was criticised by Samoans, with groups such as the Samoa Alliance of Media Practitioners for Development (SAMPOD) warning against the implications this could have on free speech and democracy.

Targets of the PM’s anger include anonymous blogger/social media poster(s) ‘Ole Palemia’. A woman detained for allegedly knowing the identity of ‘Ole Palemia’ but who was then released due to insufficient evidence, has filed a lawsuit against Samoa’s Attorney General and police. Meanwhile in February this year, Australian- based Samoan Paulo Malele, who is also known online as ‘King Faipopo’, was arrested when he returned home for his mother’s funeral. He faces charges of making threats on social media against the Prime Minister. Malele has been released on bail and will reappear in court in March. Social media activity has risen dramatically

in the Pacific with increasing connectivity and affordability of internet access. This has been aided by the proliferation of handheld devices providing more convenient access to the Internet and specifically, to social networking sites. Facebook is the most prominent social networking site in Samoa. Facebook analytics data estimate around 100,000 to 150,000 active Facebook accounts in Samoa within a period of a month. Active Facebook accounts in Samoa are comparatively between 60-70 per cent of Samoa’s estimated population. These estimates are for account holders with listed ages of 18 toover 65. Over 70 per cent of these active Samoa based account users are between 18-34 years of age, the ages covered by Samoa’s youth policy. In other words, Samoa’s youth population constitutes the majority of Facebook and online users.

Of the estimated 100,000 to 150,000 active Facebook accounts, around 52 per cent are listed as accounts for women and 48 per cent are listed as accounts for men. Samoa is somewhat unusual in this regard as in Melanesia for instance, there are more Facebook accounts listed for men than women. Around 85 per cent of Samoa’s total active accounts are situated in the capital of Apia. Over 87 per cent of Facebook access in Samoa has been facilitated through mobile devices, especially through android devices, which indicates the increasing use and affordability of mobile internet deals and gadgets.

These figures ultimately indicate that the expansion of social media in Samoa, much like in the rest of the Pacific, is inevitable and brings with it a wide range of implications. There’s a tendency for Pacific governments and leaders to react aggressively to these implications, with threats of blocking social media or with laws that seek to criminalise certain online activity. The risk of taking these reactionary approaches is to compromise free speech and expression, while wrongful arrests or arrests without sufficient evidence exacerbates the impression of an Orwellian-like state.

Old guards of Pacific leadership are now forced to face the brutal realities of globalisation and the digital expression of their citizens’ frustrations and outbursts. How this is handled by Pacific governments will test how willing its leaders are to evolve with the changing times and dynamics brought on specifically by social media. The onslaught of digital technologies is going to force Pacific governments to either adopt or adapt to these changes. Reactionary and ill-thought regulations that risk-free speech and citizen engagement, reveal more about the insecurities of government leaders than any purported benefit to democracy or peace and harmony of a society. 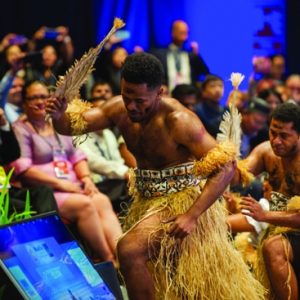