United States of the Pacific

THE derivation of the ‘United States of the Pacific’, (USoP), an optional conceptual supra-state construct for the 48-year old Pacific Islands Forum (PIF) is reminiscent of the Lae Rebellion of 1965. The rebellion marked the break-away by five Pacific Island Countries (PICs) from the South Pacific Commission (SPC, now rebranded as the Secretariat of the Pacific Community) and the creation of the South Pacific Forum in 1971. The brief for the new regional structure is the now-familiar lament of PIC leaders for greater commitment to addressing climate change. The USoP may evoke grandiosity. But as a prospective regional architectural structure, it is not unprecedented; and its time may have come.

It is a rebellion of sorts. Tuvalu Prime Minister Enele Sopoaga is not a happy camper. He takes serious exception to the suggestion by former Australian Prime Minister Kevin Rudd that Pacific islanders of Tuvalu, Kiribati and Nauru swap Australian citizenship for maritime resources owned by them. Rudd reckons that this would be a long-term solution, in any case, for the three PICs that are likely to go under with rising sea levels.

Since such a suggestion requires these PICs to surrender their respective sovereignty through involuntary constitutional changes, Sopoaga castigates the suggestion as being neo-colonialist and ‘imperial thinking.’ In Sopoaga’s mind, this suggestion is a ‘red herring’ that does not even pretend to solve the problem at hand.

Furthermore, the ire of the good PM is heightened after he notes that such a demeaning suggestion is coming from Australia after the signing of the Boe Declaration in 2018 by PIF Leaders in which climate change is reaffirmed as the “the single greatest threat to the livelihoods, security and wellbeing of the peoples of the Pacific and our commitment to progress the implementation of the Paris Agreement.”

Sopoaga’s resentment is particularly piqued by the fact that Australia had “exported $66 billion in coal last year, making it (its) most valuable traded commodity.” This is not in the true spirit of the Boe Declaration, he feels. ABC reported his statement: “The more (Australia fails to be) serious about cutting coal and exporting this for money, the more problematic the issue of global warning and the more we have to adapt.”

It was in this context when Sopoaga proposed: “the establishment of a Pacific supra-state, along the lines of the European Union (EU), that is based on cooperation and integration, perhaps into some form of United States of the Pacific.” This supra-state will comprise ‘small Pacific Island nations’ and its raison d’être is “to amplify their concerns about climate change on the global stage.”

Reflecting the Lae Rebellion, Sopoaga’s strategic move is to break from the configuration that constitutes the PIF currently to that of the USoP.

The specific architecture of the USoP is a matter of conjecture. It is clear however that it would be a forum of only PICs. What is unclear is whether it is intended as a form of regionalism or federalism or some other variants of the latter.

However, the references to the new entity being ‘based on cooperation and integration’ and exhibiting aspects of the EU, are hints strongly suggesting regionalism and not federalism or any of its variants.

It can be taken therefore that USoP would be an only-PICs/PSIDS forum. This is reminiscent of course of the 1971 SPF that started off as a two-caucus configuration – one for the five PICs and the other for Australia and New Zealand (ANZ). That configuration was determined after the five PICs opted to include ANZ in their new break-away forum. But the two-caucus approach became a single caucus approach in 1972. Australia, interestingly, was the force behind the merger of the two caucuses.

That was then. The direction the current altercation is taking appears to be single-mindedly on formation of a PICs/PSIDSonly forum. And that is essentially on basis of its intended raison d’être. Climate change, caused by global warming, is an existential threat for PICs. Sopoaga’s castigation of Australia’s undermining of the Boe Declaration, but specifically on its coal policy, echoes the concerns of other PICs Leaders. Sopoaga leads from the forefront because of the existentiality of the threat on his low-lying atoll country. Tuvalu is one of the three atoll states in the Pacific seriously impacted by rising sea levels. And on a global level, one of the four.

Questions of a USoP’s rationality and justification are valid considerations. But this has to be viewed from the perspective of existentiality of the threat. In such context, any strategy that promises relief and an escape from a certain devastation, is a strategy worth considering. There is nothing untoward about this. Humans are hard-wired to always seek preservation and self-improvements; and conservation is very much a part of that. Any physicist or futurist will tell you that.

Consideration of sustainability comes next. How can a USoP be made sustainable? How can USoP be effectively resourced? This is an obvious challenge for the PICs/PSIDs. The solution must lie in the collective’s imagination. It is therefore the collective’s responsibility to elevate its imagination to unprecedented heights to seek relevant solutions. If global powers are queuing up to be counted in the Pacific, the largest ocean on Planet Earth, if they are always seeking PSIDS’ support at the UN to get the numbers that secure mandatory majority of backers, then USoP should not be lacking prospective offers of assistance.

From the perspective of good governance and strategic autonomy, USoP has to be sustainably and innovatively funded. This is its quid pro quo.

If, for historical sentimentality and/or propriety, the linkage with ANZ is to be preserved, then this too can be addressed. Possible solutions are within our grasp. Clearly, however, any solution must preserve the PICs/PSIDS-only forum configuration. The idea of a two-caucus approach was tried in 1971, each caucus having its own meeting and then coming together for a joint meeting, then adopting a joint communique as a result.

This two-caucus approach worked recently during the negotiations on PACER Plus. PICs negotiators planned out their trade strategy separately and then they negotiated with their counterparts from Australia and New Zealand.

If the preference is for a more formalised configuration, then we can learn from that existing relationship between the EU and the Pacific members of the African Caribbean and Pacific Group of states (PACPs). PACPs are members of the ACP Group. But under the existing Cotonou Agreement, EU has a direct structural link with the PACPs. The EU has its regional indicative programme with PIF/PIFS and national indicative programmes
with individual PACPs.

In my chapter: ‘Towards a New Regional Diplomacy Architecture’, published in ‘The New Pacific Diplomacy’, edited by Greg Fry and Sandra Tarte, 2015, ANU Press, I provided an architectural configuration that captures such a relationship with Australia and New Zealand. The same configuration can be expanded to link with other global powers wanting to partner with PICs/PSIDS.

Sopoaga’s USoP emerged from the concern about the existentiality of global warming/climate change in PICs and how best this can be addressed by them. It may have come about from disillusionment with PIF member Australia. It does demonstrate however the strength of feeling when an existential threat does not receive the commitment it deserves.

The author is a former Fijian ambassador and Foreign Minister and runs his own consultancy company in Suva, Fiji. 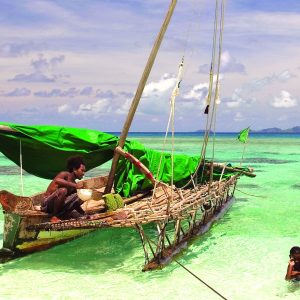 Is PNG part of Pasifika?

IS our region’s largest country, Papua New Guinea, part of Pasifika? It’s a debate that has