Is PNG part of Pasifika?

IS our region’s largest country, Papua New Guinea, part of Pasifika? It’s a debate that has recently played out on the pages of an influential PNG blog. Two of the country’s most prominent commentators have their say here, in important discussions about the future of regionalism.

Last year in Goroka I attended a party at a hotel. Although hundreds of kilometres from the sea and high in the clouds of the Papua New Guinea highlands, it was a Pasifika themed party.

Luckily I had taken along my sulu on that work trip and so, wearing my sulu and a bula shirt, I was pretty much 100 percent Pasifika for the night. (It also turned out I was the only Pasifikadressed party goer, so by default won the prize that was on offer.)

My Goroka experience provided a glimpse into how PNG wants to be Pasifika but doesn’t behave as such. Not just in fashion, of course, but in terms of common values and more importantly the customs (kastom) that define this region and its people.

My first observation of why I think PNG is not a Pasifika nation is that of how we perceive our physical environment. One really gets a sense of Pasifika as the ‘liquid continent’ when taking off from Honiara, Nadi or Nuku’alofa and noting how tiny are the islands and how vast the ocean. From Port Moresby, you can look to the horizon and see land stretching to the peaks of the highlands.

This is an important contrast because it gives Pasifika people a sense of their place in the world. Do we Papua New Guineans see ourselves as people of that liquid continent of which wrote Tongan-Fijian writer and anthropologist ‘Epeli Hau’ofa?

In the current context of regional integration, do we see ourselves as part of the Pacific Islands Forum’s agenda as people of the Blue Continent with a Blue Economy? Is PNG’s economic future on land or in the ocean like other Pasifika nations?

Questions about a shared Pasifika future are important because, while some policy thinkers at the regional and national level may think so, my view is that PNG doesn’t share this common future with its Pasifika neighbours.

The first and most important reason I say PNG is not Pasifika is that it needs to and wants to industrialise to take care of its eight million people.

Indeed we are already extracting large quantities of carbon (oil and gas) from the ground selling it to the world. And we have coal which we might soon be exploiting.

Harsh as these words read, whilst we will feel negative consequences of climate change, these may not erase our nation from the surface of the earth like they might other Pasifika states.

So while industrialisation means increased carbon emissions and contributing to global warming and climate change, perhaps we can afford to do this because much of our land mass is 1,000 meters above the sea. PNG is also not Pasifika because of the nature of the relationship the State has with Society which is different from other

Pasifika countries. Regional integration is easier if nation states have shared values and principles of governance.

The relationship between State and Society in PNG is one I would describe as paternalistic whereas Pasifika states tend to be more Maternalistic.

In PNG, the economic relationship between state and society is a predatory relationship. Waigani’s predatory elite exploit the land and resources of the people, apparently in the national interest. In terms of the provision of public goods and services, the State tends to throw out its people to fend for themselves and be exploited without social safeguards or even access to justice. Pasifika governments tend to take better care of their people and protect their interests.

There are other perhaps more controversial areas of contrast like culture, sovereignty, decolonisation, demilitarisation and West Papua, but I won’t delve there for now.

My view is that PNG has a very different development trajectory to that of other Pacific island nations.

It won’t be easy to chuck PNG out of the regional space due to historical and geographical reasons, but I believe PNG’s place in the Pacific is similar to that of Australia and New Zealand.

We are a friend, but we are not a member of the Pasifika family of nations

Martyn Namorong is the Coordinator of the Papua New Guinea Resource Governance Coalition, and a member of the PNG EITI Multi-Stakeholders Group (PNGMSG).

PNG is Pasifika by necessity: A response to Martyn Namorong
By Patrick Kaiku

The commentary in PNG Attitude by Martyn Namorong, ‘PNG is not Pasifika – we are not so much of the ocean’, needs rebuttal. Namorong’s critique is not new. Solomon Islands scholar Tarcisius Kabutaulaka made similar observations in relation to Epeli Hau’ofa.

Kabutaulaka stated: “We need to recognise that focusing on the ocean as the element that connects us immediately marginalises the millions of people who live inland, in places like the highlands of Papua New Guinea, for whom the ocean has little significance.”

Kabutaulaka concedes however, that Hau’ofa “challenges us to think in ways that empower us, rather than marginalise and weaken us.”

This terrestrial orientation of Papua New Guineans is natural.

Insulated as we are from others by the perceived vastness of our land expanse, Papua New Guinean exceptionalism can restrict a more holistic, and wholesome, knowledge of our Pacific neighbourhood.

I teach PNG students who initially struggle to name the countries and territories on the unlabelled map of the Pacific region. This is not surprising. To their own peril, even citizens of the United States are terrible with geography, given their own misconception of their place in the world.

Why learn and immerse yourself in the knowledge of other places and cultures, when you are the most powerful state in the world, a continent unto yourself?

The first point in Namorong’s commentary states: “why I think PNG is not a Pasifika nation is that of how we perceive our physical environment.”

Sure, the ocean is not a common identity marker for thousands of Papua New Guineans. The Bainings of East New Britain or Lelet plateau inhabitants of New Ireland don’t identify much with the ocean, even though they live in island provinces.

But is the Blue Pacific or Pasifika simply about the “physical environment”? Pacific Islanders use metaphors to communicate universal values and ideas.

The Blue Pacific is a metaphor, just like Hau’ofa’s “our sea of islands”. The Blue Pacific must be read together with the Boe Declaration of 2018 to understand the context in which it is used.

The Boe Declaration emphasises environmental and resource security, among other things. Surely, these are concerns Papua New Guineans share. The Blue Pacific represents values that PNG acknowledges in its national development blueprints.

Contrary to how we think of ourselves, PNG is a small state. In international diplomacy, PNG depends on multilateralism. PNG aligns with other small states to be effective. Together, small states are numerically formidable in forums such as the United Nations.

Small states in the Pacific have success stories in their lobbying initiatives. PNG has been a partner and a beneficiary in these initiatives.

The high-water mark of collective diplomacy in the Pacific was from 1979-1990. The United Nations Convention on the Law of the Sea of 1982, the 1985 South Pacific Nuclear Free Zone Treaty, and the banning of driftnet fishing of 1989, attest to the ‘power in numbers’ in international diplomacy.

Blue Pacific is a renewed effort in collective diplomacy, especially in light of the current geopolitical rivalry in the Pacific Islands and threats of environmental and resources insecurity.

Moreover, in the global community, Pasifika is a flexible term that is used in relation to non-Pacific Islanders. It is contextual and denotes certain levels of affinity, much like ‘wantok’. Fijians don’t speak Tok Pisin. But I run into a Fijian outside of the Pacific and he or she is a wantok, simply by virtue of being a Melanesian.

A Papua New Guinea, may not physically identify with the ocean, but the benefit of Pasifika is its expansiveness and inclusivity, just like the physical ocean. That is the whole logic of Hau’ofa’s “world enlargement” thesis.

Namorong also raises a question, “Is PNG’s economic future on land or in the ocean like other Pasifika nations?” The simple answer is yes.

Look at the evidence. PNG is the third largest country in the Pacific Islands in terms of its Exclusive Economic Zone (EEZ) – behind Kiribati and the Federated States of Micronesia.

If we are comparing PNG’s land mass (462,840 km²) with it is total EEZ (2,402,288 km²), PNG is a maritime state because it has more ocean space, than landmass. Indeed, our participation in multilateral initiatives like the Parties to the Nauru Agreement is testament to the resources of the ocean.

Our national security, commerce, and potentially, economic resources are dependent on the ocean. The Goroka resident, living thousands of kilometres away from the nearest coastline may not identify with the sea.

But it is through unrestricted access to important trade routes on the sea that merchandise produced in Asia or Europe reach the Goroka resident. The ocean is the lifeblood of PNG’s commercial relations with the outside world and a free and open sea is in PNG’s national interest.

In terms of resources, the finite land-based resources that are recklessly being extracted will all be exhausted. Where do we think people will start looking to extract resources?

Nautilus insists on mining the seafloor of the Bismarck because of the intellectual property rights from its extractive technology and scientific knowledge of the seabed. These will be highly demanded in the foreseeable future when resource scarcity on the land becomes apparent.

For all we know, the resource wars of the future may be over tracts of ocean floor rich in rare earth metals and other lucrative resources. In the areas of bio-prospecting, David Kenneth Leary identifies the untapped potential of genetic resources of the deep sea. He concludes, “Increasingly the race to the bottom of the deep sea for new developments in biotechnology is also becoming a race to be the first to the patent office”.

Finally, Namorong asserts: “whilst we will feel negative consequences of climate change, these may not erase our nation from the surface of the earth like they might other Pasifika states”.

Sure, PNG may not be erased off the surface of the earth. But parts of PNG’s sovereign space are already facing the prospects of going under water. This will generate its own social and cultural upheavals.

PNG has recorded some of world’s first cases of “climate refugees” (in the Bougainville atolls). Islands such as the Duke of Yorks are also densely populated and the easy way out is emigration.

The dynamics of land ownership and resettlement, as seen in the case of the Manam and Carteret resettlement programs, will come under increasing scrutiny as more low-lying islands of PNG are erased.

Social tensions relating to land resources and cultural assimilation will be the challenge for PNG.

PNG may not be erased off the face of the earth, but that’s no sure comfort at all. Some of its cultures, languages and peoples face extinction as a result of climate change and sea level rise.

Surely the Pasifika can teach us to be modest and frugal.

The debate first appeared in the blog: Keith Jackson and friends:
PNG attitude at asopa.typepad.com 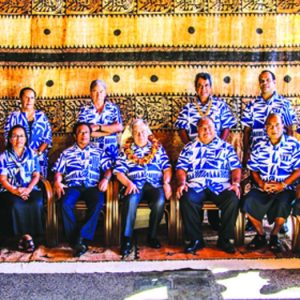 United States of the Pacific

THE derivation of the ‘United States of the Pacific’, (USoP), an optional conceptual supra-state construct for