Why PHAMA Plus matters to the Pacific

PHAMA Plus was launched in Suva on 11 April 2019 although it has been operating since 1 November 2018. The ‘Plus’ tag signifies that it is a follow-up to the original PHAMA, which is the acronym for Pacific Horticultural and Agricultural Market Access. This multi-country Aid for Trade (AfT) programme is funded by Australia and New Zealand. Like all AfT funding, it is aimed at helping developing countries, in particular Least Developed
Countries, to build trade capacity and the infrastructure they need to benefit from trade.

AfT is an initiative of the World Trade Organisation (WTO). It was launched in 2005 at the WTO Conference in Hong Kong. Its taskforce was established the year after in 2006, and 2007 saw its first stage of implementation. The following year indicators were formulated to help with its monitoring. The 2015 WTO Conference in Nairobi further boosted its recognition and importance. Annual monitoring of AfT since 2009 had been conducted to achieve specific developmental outcomes. For example for 2009, the theme was ‘maintaining momentum’ and for 2010 it was ‘showing results.’

The original PHARMA facility ran for seven years to 2018. It’s goal “was to increase exports of fresh and value-added agricultural products, contributing to economic growth and improved rural livelihoods. There were three main expected outcomes: (i) increased export volumes, (ii) better farmgate prices, and (iii) protection of existing export markets.” The new PHAMA Plus Program provides a ‘Country Strategy Note’ (CSN) for each beneficiary countries, in which evaluations of the outcomes, and more, are discussed in detail.

In retrospect, each of these PICs has reasons to be positive about the results of PHAMA. In Vanuatu, the last of the PICs above to become a WTO contracting party, PHAMA’s main contributions were in kava, beef, cocoa, sandalwood, handicrafts, beekeeping and food safety.

Vanuatu’s CSN has this to say on ‘food safety’: “PHAMA provided support for Hazard Analysis and Critical Control Points (HACCP) accreditation of three businesses and a HACCP Train-the-Trainer course to build industry and government capacity.” HACCP is a systematic preventive approach to food safety from biological, chemical and physical hazards in production processes that can cause the finished product to be unsafe and designs measures to reduce these risks to a safe level.

PHAMA Plus extends its facilities to the six original beneficiaries of PHAMA as well as to the small island states of the Forum on ratifying the PACER Plus trade agreement.

For Vanuatu, PHAMA Plus continues the momentum of PHAMA. Eleven sectors were proposed for coverage – from agriculture, livestock, fisheries, forestry and handicrafts. However, for more effective management and approach, these sectors are being grouped into four categories.

Such commitment by Australia and New Zealand, two developed WTO contracting parties, is notable for three reasons. Firstly, Fiji and PNG, despite pulling out from PACER Plus, remain as beneficiaries under PHAMA Plus. Their continued involvement could be justified on the basis of their previous benefit under PHAMA, and because there is still more to be done. Furthermore, they are important trading partners for Australia, New Zealand and the region, under inter-Pacific island countries trade. Under Pacific regionalism and Melanesian Spearhead Group (MSG) sub-regionalism, for example, the contribution by these two PICs to economic integration would be immense. Inter-Pacific island countries trade in the region is currently conducted under the Pacific Islands Trade Agreement (PICTA). For the sub-region it is conducted under the MSG Trade Agreement (MSGTA).

The second reason why Australia and New Zealand’s commitment under PHAMA Plus is of note is that both have agreed to extend this facility to non-WTO contracting parties in general – to small island states, when they ratify PACER Plus. This includes eight Pacific island countries that participated in the PACER Plus negotiations: Cook Islands, Federated States of Micronesia, Kiribati, Nauru, Niue, Palau, Marshall Islands and Tuvalu. Of these, five have signed PACER Plus and are working towards ratification.

The situation that has evolved is not an afterthought. Australia and New Zealand agreed during the PACER Plus negotiations that they would commit resources for AfT. They would have been driven by their sense of commitment – explicit and implicit, in the GATT articles above. Furthermore, they would have been driven by their commitment to Pacific regionalism, especially regional economic integration as they had done over the years through trade and economic instruments like the South Pacific Regional Trade and Economic Cooperation Agreement (SPARTECA) (1981), Pacific Agreement on Closer Economic Relations (PACER) (2003) and PACER Plus (2017).

During the PACER Plus negotiations, Australia pledged an AfT funding target for the Pacific of 20% of Pacific Official Development Assistance (ODA). New Zealand pledged a similar percentage of its total ODA.

The third and final reason why Australia and New Zealand’s commitment is of note is the interactions of different initiatives at play here. An original bilateral initiative by AusAID, in response to its multilateral commitment, became extended bilateral aid with NZAID in the greater interest of Pacific regionalism. The combined facility proved effective and is now extended. It has become a specific tool for multilateralism, from whence it came, and with which Australia and New Zealand can aspire to assist even those countries that are not members of that multilateral body. 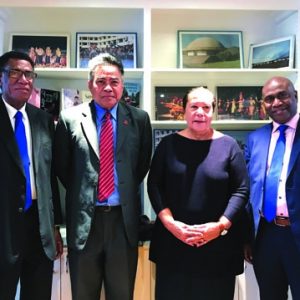 Roadblocks on the path to a post-Cotonou deal

THERE are many suitors currently wooing the Pacific islands. Australia is “stepping up” and New Zealand “resetting”