Roadblocks on the path to a post-Cotonou deal

THERE are many suitors currently wooing the Pacific islands. Australia is “stepping up” and New Zealand “resetting” its relationship. China comes bearing gifts, India wants to be an Indo-Pacific player, while US officials are reading Twitter to work out their policy towards the “Pacific theatre.” The European Union, however, is everywhere. The EU is promoting the strategic interests of its largest member states and seeking a new relationship with Pacific island countries through a “post-Cotonou” treaty.

For the last 20 years, the Cotonou Agreement has governed relations between the EU and the African, Caribbean and Pacific Group (ACP). Now the EU is seeking a strengthened political and economic partnership and enhanced cooperation in multilateral fora. The proposed post-Cotonou deal, however, poses potential pitfalls for island governments and communities.

Since the 1970s, relations between the 28-member EU and 79 former European colonies have been governed by a series of treaties. The Lomé Convention (1975-2000) opened the way for subsidised trade between the EU and some Forum member states, including fish exports from Papua New Guinea and sugar from Fiji. The Cotonou Agreement (2000-2020) was extended to cover aid, trade, human rights and political dialogue, with
the EU pledging to sign Economic Partnership Agreements (EPA) with six regions around the world.

The proposed post-Cotonou framework includes a foundation agreement and three separate regional protocols for Africa, the Caribbean and Pacific. Last June, Pacific members of the ACP Group (PACP) met again to discuss the proposed Pacific-EU protocol. The outcomes document of this meeting records that Pacific governments recognise “the post-Cotonou Agreement will set the direction of the partnership between the Pacific and the EU for the next twenty years.”

Samoa and Papua New Guinea are the two Pacific leads in ACP ambassadoriallevel negotiations, with Samoa Prime Minister Tuilaepa Sailele Malielegaoi noting: “In the formative years of the EU-Pacific partnership, the consultations were mainly focused on aid related matters and in particular implementation issues, which were seen as a perennial problem added to by procedural complexities. In recent times and in the context of the Cotonou Agreement, trade and the political dimension of the relationship have been added, with trade domination of the discussions.”

Nearly two decades ago, the Cotonou Agreement was due to be signed in Suva in June 2000. However, the Speight coup of May 2000 put paid to that, and the African nation of Benin hosted the signing ceremony. Now, the ACP Council of Ministers has unanimously agreed the new agreement should be signed in Samoa next June.

Will the signing proceed on schedule? Negotiations are still underway, but there are significant differences over trade, migration, labour mobility and co-operation mechanisms. Here are a number of roadblocks on the path to a post-Cotonou deal….

1) Finalising a deal on schedule
Speaking in Brussels in May, Secretary General of the ACP Patrick Ignatius Gomes expressed concern that a final text will not be ready for signature by the 79 ACP states in February 2020 – the date when the 20-year Cotonou Agreement ends. Dr. Gomes said there is a need to adopt transitional measures until a new agreement enters into force, if negotiations continue past February. At their June 2019 meeting, Pacific leaders endorsed the need to prepare a transitional agreement, recognising “The post-Cotonou negotiations (PCN) and Regional Protocol negotiations timetable is extremely ambitious.”

Throughout the whole 20-year period of the Cotonou Treaty, the EU and Pacific Islands Forum failed to finalise a comprehensive regional Economic Partnership Agreement (EPA) for the Pacific. The tortured negotiations over the regional EPA left a sour taste in the mouth of Pacific negotiators.

Are we heading for the same problem again, with the EU prioritising Africa over the Small Island Developing States in the Caribbean and Pacific? With outstanding differences over key issues like trade, migration and labour mobility, there’s a long way to go before the finalisation of a new treaty. There are still two of six areas in the framework agreement where EU and ACP negotiators cannot agree: ‘Inclusive and Sustainable Economic Development’, and ‘Migration and Mobility.’

Unless the EU addresses regional concerns, lengthy negotiations for a post-Cotonou deal seem like a fair bet!

2) A new framework for co-operation
The notorious bureaucracy and complexity of EU aid delivery has long been an area of disagreement with Pacific governments, especially smaller island states. But now the EU is seeking to change its aid budgeting and delivery. In a post-Cotonou world, there are signs that the EU wants to shift away from the European Development Fund (EDF), which has been a crucial mechanism for both regional and national-level funding to the Pacific.

The EU is also debating new multilateral frameworks for political co-operation. Currently, the EU is a Dialogue Partner within the Pacific Islands Forum, alongside individual EU members (Germany, France, United Kingdom, Italy and Spain). Would a new EU-ACP structure sideline the Forum Dialogue, where the Pacific talks directly to all 18 Dialogue Partners at one time?

3) Boris Johnston and the dis-United Kingdom
The Australian and NZ governments are promoting the United Kingdom’s return to the region, dubbed “Pacific Uplift”, as a crucial contribution to the containment of China. But Westminster is in chaos with debate over Brexit, the likely ascendance of Boris Johnston as Prime Minister and anger in Scotland over the planned withdrawal from the EU. It’s not yet clear what Britain will contribute to the Pacific if Brexit is ever finalised.

As this uncertainty extends, the ACP Group have expressed deep concern that a revised EU-UK trade deal will adversely affect access for ACP exporters to both markets. Will the EU and Britain prioritise the interests of Pacific exporters like Fiji and Papua New Guinea in their negotiations for the Brexit withdrawal from the EU? Don’t hold your breath!

4) A French gateway to Europe?
Brussels sees the EU’s network of Overseas Countries and Territories (OCT) – ongoing French and British colonies – as a crucial asset in the post-Cotonou deal. But what does this mean for Pacific island countries’ commitment to decolonisation for New Caledonia and French Polynesia? The United Kingdom retains its colonial presence in the region with Pitcairn, a major bulwark against Chinese expansionism. In contrast, France asserts sovereignty over 7 million square kilometres of Exclusive Economic Zone (EEZ), through its control of New Caledonia, French Polynesia, Wallis and Futuna and Clipperton Atoll.

To its EU partners, France presents the Paci?c dependencies as a gateway for European engagement with the region. In turn, Paris tells the Forum that its Pacific dependencies provide an opening into Europe. In an interview with Islands Business at the Apia Forum, French Polynesian President Edouard Fritch said: “Many countries see New Caledonia and French Polynesia as a pathway to France and to Europe, for Europe is present here in the Paci?c.”

However, it is not clear how the membership of French Polynesia and New Caledonia in the EU’s OCT network provides a mechanism for independent island nations to engage with Europe. Why should sovereign states channel their bilateral and multilateral relations with EU member countries through the EU OCT Group, alongside the confetti of empire like Pitcairn, St Helena and the Falklands/Malvinas?

5) Following the lead from Paris?
France continues to control key legal and political powers over its Pacific dependencies, including security, military affairs and key aspects of foreign relations (such as the right to sign treaties like the Paris Agreement on Climate Change). For this reason, the full membership of New Caledonia and French Polynesia in the Forum amplifies the capacity of the French Republic to intervene in current debates about EU relations.

When it comes to the crunch, will local governments in Noumea, Papeete and Mata Utu back their island neighbours in the looming deal with the EU? Or will France demand that its three Pacific dependencies fall into line with French policies within the EU?

Already, French strategic interests are coming to the fore in the Blue Pacific agenda. Just look at the ongoing battle between France and Vanuatu over control of Matthew and Hunter Islands, or the recent court ruling in Paris that rare earths found in French Polynesia’s EEZ are “strategic metals” and therefore come under the control of Paris, not Papeete.

However as a colonial power, France’s control of marine resources breaches long-standing decolonisation resolutions of the United Nations, which affirm that “any administering power that deprives the colonial people of Non Self-Governing Territories of the exercise of their legitimate rights over their natural resources… violates the solemn obligations it has assumed under the Charter of the United Nations.”

The EU has been a key mechanism for France and the United Kingdom to advance their regional influence. In a post-Cotonou world, EU member states are looking to extend their own strategic interests in the oceans, focussing on fisheries, bio-prospecting and deep-sea mining, through major funding for Pacific regional organisations. For example, the EU has funded the SPC program to develop model legislation for Pacific countries to
govern deep sea mining.

In 2017, Sweden co-hosted the first global summit on the Oceans alongside Fiji. Now Sweden has contributed €10 million (US$11.2 million) to the €45 million (US$50.5 million) Pacific-European Union Marine Partnership (PEUMP) program, with the EU contributing the remaining €35 million (US$39 million) for SPC, FFA, USP and SPREP. This four-year initiative focuses on areas such as the reduction of illegal, unreported and unregulated fishing (IUU) fishing and “trade-related negotiations to remove fisheries subsidies.”

With the rush to complete a post-Cotonou agreement, will this diverse range of actors be properly consulted by Forum island governments? Will there be wellresourced and timely national consultations to guide negotiators, or will the final text be completed behind closed doors at regional level? 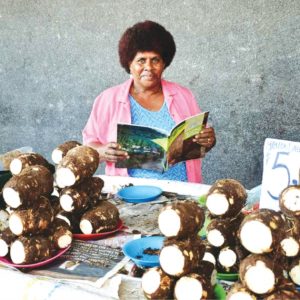 Why PHAMA Plus matters to the Pacific