Goundar Shipping owner George Goundar made those comments in response to claims made by the passengers on board the Lomaiviti Princess V which aborted its voyage to Suva and returned to Savusavu last Sunday night after rough seas reportedly dislodged open a door leading to the bow of the Roll-on Roll-off ferry.

The vessel carrying more than 400 passengers left Savusavu for Suva on Sunday afternoon when crew members noticed the leak, after one hour of sailing.

Confronted with this by IB Online, Goundar said that was all under control.

“It is sad that people are politicising the system when we are trying our best to provide the best shipping services to the people of Fiji,” said Goundar.

He also said no compensation would be paid to vehicle owners who claimed their vehicles were damaged during the aborted voyage to Suva last Sunday. This is in spite of photographs posted by some passengers on Facebook showing damaged vehicles.

The boat, built 54 years ago, was the latest acquisition of Goundar Shipping, bought from BC Ferries in Vancouver, Canada last year for reportedly US$2.3 million

IB Online sought comments from the owner of Lomaiviti V as passengers had gone on social media to lament their ordeal.

One described what happened as a “frightening experience.”

Another passenger, Barbara Smith who was with her two months old daughter said passengers were not informed of anything until the boat returned to Savusavu.

She said some passengers began to search for life-jackets on their own.

Another angry passenger Mikaele Vosa said the vessel sailed on reverse to Savusavu jetty after demands from other passengers when they learnt of the dislodged door and that the vehicle deck has been flooded.

He said children were crying, while some adults hold on tightly to each for support as the vessel listed to one side.

Goundar Shipping Senior Master Inoke Ratotodro confirmed that water had seeped into the lower deck after the bow door was opened but he said his crew managed to get everything under control.

“We did not inform the passengers because it was a minor incident and an emergency plan was unnecessary,” Ratotodro said.

“That is why we did not issue life jackets either,” he added.

Captain Ratotodro said the Lomaiviti Princess V was built in such a way to allow for water to seep into the deck and out into the sea again. This happens so long as the valves are open to avoid trapping water inside.

CEO of the Maritime Safety Authority of Fiji  Captain Philip Hill reiterated to IB Online that rough weather caused the leak and the crew of the Lomaiviti Princess V managed to prevent any boating mishap.

The Lomaiviti Princess V has since left Suva for Taveuni last night. 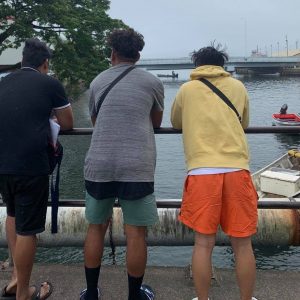